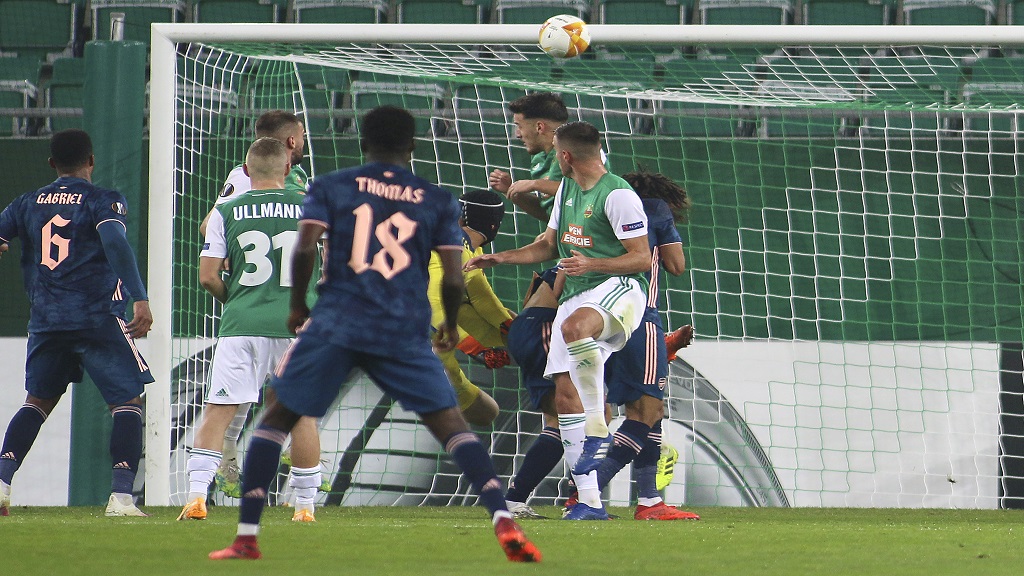 Arsenal opened their fourth straight Europa League campaign with a 2-1 come-from-behind win at Rapid Vienna on Thursday in an opening round of games affected by the coronavirus pandemic.

Star striker Pierre­ Emerick Aubameyang came off the bench to score the winning goal in the 74th for Arsenal, which won their group in the previous three campaigns in the second-tier European competition.

Roma also came from a goal down to win 2-1 at Young Boys, as did Granada to upset PSV Eindhoven away.

Rangers' Kemar Roofe scored the goal of the night in a 2-0 victory at Standard Liege, dribbling his way through three opponents inside his own half and then launching a shot from the halfway line that caught the goalkeeper off guard and looped into the net.

Arsenal went behind when goalkeeper Bernd Leno played a poor pass that fell to Rapid forward Taxiarchis Fountas, who slotted in a low shot from a tough angle in the 51st minute.

Arteta sent on Aubameyang and Héctor Bellerín in the 61st, and the substitutes helped spark the comeback.

After David Luiz headed in a free-kick from Nicolas Pépé to level the score, Mohamed Elneny freed Bellerín down the right to cross for Aubameyang to complete the comeback from close range.

In the other Group B game, Molde also came from behind to win 2-1 at Dundalk.

AZ Alkmaar flew into Naples with 13 players sidelined with coronavirus infections. Napoli, meanwhile, was coming off a 4-1 win over high-scoring Atalanta 4-1 this past weekend. But the Dutch staved off the hosts' pressure before Dani de Wit scored the winner in the 57th. Real Sociedad won 1-0 at Rijeka in the other Group F game.

With Roma resting striker Edin Džeko, Bruno Peres and Marash Kumbulla led the rally with the second-half goals for the Italian side.

Jean ­Pierre Nsame had given Young Boys the lead by converting a penalty kick in the 14th.

It was the first home loss for Young Boys to an Italian opponent in European competitions after beating Udinese, Napoli and Juventus.

In a game between teams from two countries whose domestic leagues have been interrupted due to high levels of coronavirus infections, Israel’s Hapoel Beer-Sheva beat Czech Republic’s Slavia Prague 3-1.

James Tavernier gave Celtic the lead from the penalty spot in the 19th before Roofe added his spectacular second goal in injury time. Benfica won 4-2 at Lech Poznan in the other Group D game.

In Group E, German forward Mario Götze put PSV ahead in first-half injury time before Jorge Molina and Darwin Machis scored for Granada in the second half. Omonoia drew with PAOK 1-1.