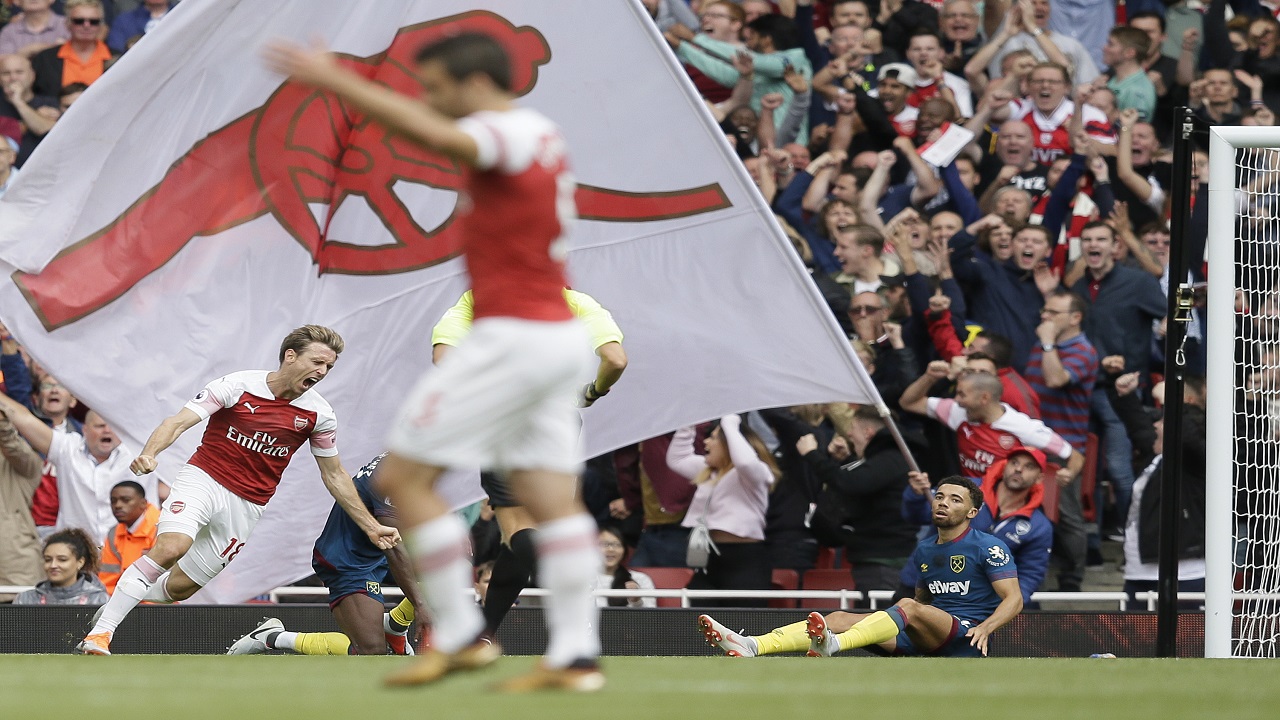 Arsenal did just enough to get a first Premier League win under new manager Unai Emery at the third attempt.

The Gunners came from behind to beat West Ham 3-1 on Saturday, with the help of a fortuitous own-goal.

The visitors' lead didn't last long after right back Hector Bellerin broke free from West Ham's defense and ran toward the byline. Bellerin whipped in a cross that flew by several Arsenal players right in front of goal, but the ball fell to unmarked left back Nacho Monreal who slammed it past West Ham keeper Lukasz Fabianski in the 30th.

Arsenal got some good fortune in the 70th when West Ham failed to clear the ball and Aaron Ramsey headed it back into the area. The ball fell to substitute Alexandre Lacazette whose attempted cross ricocheted off West Ham defender Issa Diop's chest and in for an own-goal.

It was just the bit of luck that Emery was searching for as Arsenal struggled to control the game for long stretches.

Substitute Danny Welbeck sealed the victory in stoppage time, when Bellerin found him unmarked in the area. Welbeck was able to turn and spin before he struck, with Fabianski having little chance.

Arsenal lost their first two matches this season, albeit to tough opponents Manchester City and Chelsea, and questions were already being asked if the new manager was good enough to motivate his players.

Emery is hoping his players grow accustomed to a new possession-based system, but the Gunners have had a hard time adapting after the Spaniard took over from Arsene Wenger.

Arsenal frequently gave the ball away as the team tried to build play from the back at Emirates Stadium.

But as soon as Arsenal went ahead, the team seemed more at ease, bounding forward with the free-flowing football of old that Arsenal used to be known for.

A drab encounter had looked set to end all square after Demarai Gray cancelled out Ryan Bertrand's fine opener on his 150th appearance for the Saints.

But Pierre-Emile Hojbjerg was shown a second yellow card for a clear dive in the penalty area with 13 minutes remaining and Leicester pushed on in search of a winner.

It arrived from the right boot of England man Maguire in stoppage time as he drilled through a crowded area, beating the rooted Alex McCarthy low to his right.

At the Vitality Stadium, in Bournemouth,  a thrilling 2-2 draw between Bournemouth and Everton ended in concerning fashion as Michael Keane was taken off on a stretcher wearing a neck brace following a sickening aerial collision in stoppage time.

The scorer of Everton's second goal required oxygen following a mid-air clash with team-mate Idrissa Gueye, forcing a lengthy break in play and overshadowing what had been an eventful clash featuring two red cards.

Everton had earlier defied Richarlison's first-half sending off for retaliation against Adam Smith to establish what seemed a match-winning cushion courtesy of Theo Walcott and defender Keane.

But, though Smith himself received his marching orders in between that quickfire salvo, the Cherries snapped into action to net twice in four minutes and ensure both teams remain unbeaten after their opening three Premier League fixtures.

Huddersfield's home form proved vital to their survival last term, but the Terriers - who conceded nine goals over the course of their opening two fixtures - lacked the clinical edge to overcome Cardiff's stubborn rearguard in the first Premier League meeting between the two sides.

And just as the hosts had started to click into gear in the second half - Neil Etheridge having denied Steve Mounie an opener - Hogg's rash headbutt on Harry Arter handed Cardiff the impetus with 63 minutes played.

Cardiff could not craft an opening despite their numerical advantage, though, substitute Jonas Lossl pulling off a fine stop to deny Danny Ward a winner.