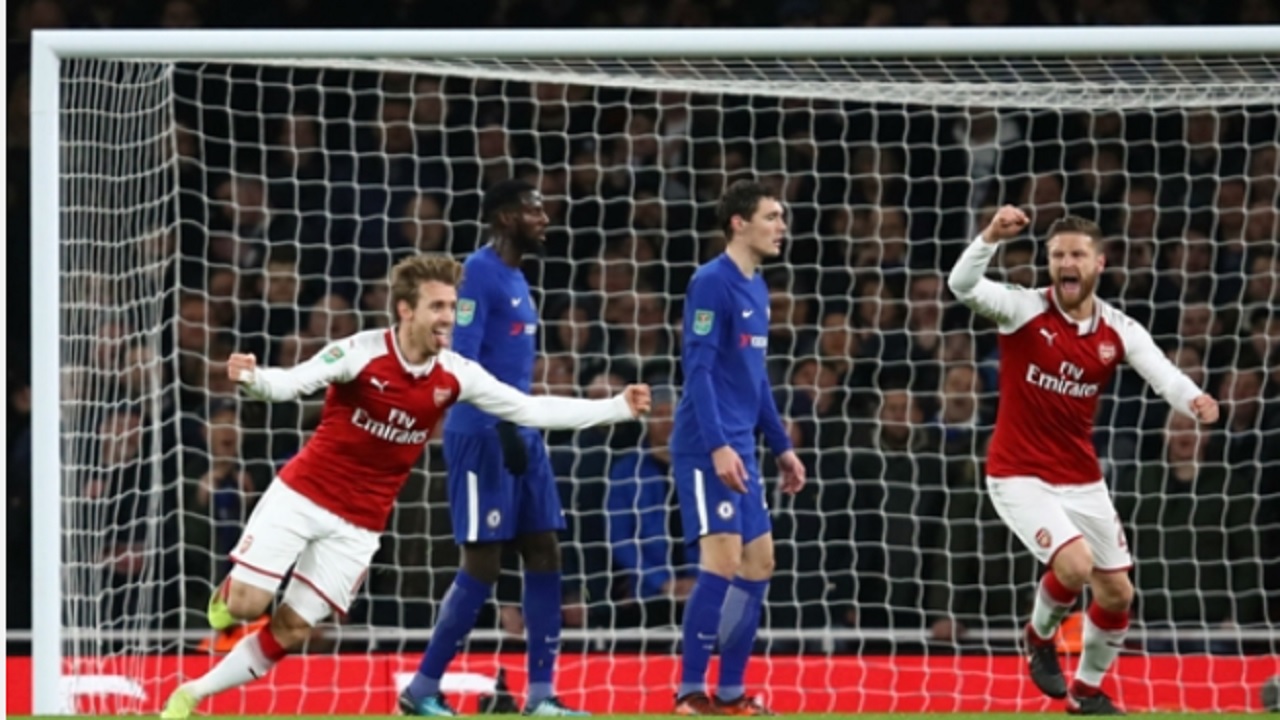 Arsenal came from behind to beat Chelsea 2-1 and set up an EFL Cup final clash with Manchester City thanks to Granit Xhaka's second-half winner at the Emirates Stadium on Wednesday.

The 0-0 draw at Stamford Bridge set the second leg up nicely and, although neither side was at their best, Arsenal showed the greater character in their first outing since Alexis Sanchez's departure as they battled back from an early deficit to book their passage to Wembley.

The opening exchanges were particularly eventful as Pedro saw a goal chalked off just before setting up Eden Hazard for the opener after only seven minutes.

An Arsenal equaliser followed soon after, though, as Antonio Rudiger scored an own goal that he knew little about, with Nacho Monreal's header hitting Marcos Alonso and then going in off the German.

The second period was rather less open as the contest became more bogged down in midfield, but Arsenal - who were without the cup-tied Henrikh Mkhitaryan - took full advantage when a chance presented itself on the hour as Xhaka prodded Arsene Wenger's men into the lead.

Chelsea poured men forward towards the end in a desperate attempt to force an extra 30 minutes and that almost allowed Arsenal to get a third through Alex Iwobi, though the Gunners were not made to rue his miss as they successfully held on to set up a finale with City on February 25.

Antonio Conte's side made a purposeful start and appeared to catch Arsenal off guard with their early intent.

Pedro saw a goal correctly disallowed for offside five minutes in, but that was a warning Arsenal failed to heed and Chelsea were not to be denied soon afterwards.

The Spaniard was at the heart of things again, turning provider as he fed Hazard between Laurent Koscielny and Monreal for the Belgian to coolly find the bottom-left corner.

Their lead was short-lived thanks to a fortuitous equaliser in the 12th minute, however, Monreal's header deflecting off Alonso and the unfortunate Rudiger before beating Willy Caballero.

Chelsea suffered the blow of losing Willian to injury after half an hour, allowing Ross Barkley to enter for his debut following a £15million move from Everton.

But one of his first involvements saw him concede a free-kick from which Xhaka went close.

And Chelsea survived again just before the break as Mesut Ozil's deflected effort went agonisingly wide of the left-hand post.

Things were tighter at both ends upon the restart, with the next opportunity not arriving until the 57th minute when Cesar Azpilicueta cleared Iwobi's cut-back narrowly over his own goal.

But Arsenal's second did arrive promptly as Alexandre Lacazette saw his low cross deflect off the hapless Rudiger into the danger zone and Xhaka was there to stab home from close range.

Iwobi should have put the contest beyond Chelsea 14 minutes from time, but he shot straight at Caballero with just the goalkeeper to beat.

Chelsea enjoyed some late pressure and Rudiger could have levelled eight minutes from the end when he met Hazard's corner, but he headed over and Arsenal ultimately held on without undue cause for concern.

Chelsea and Arsenal turn on the power with 4-goal shows