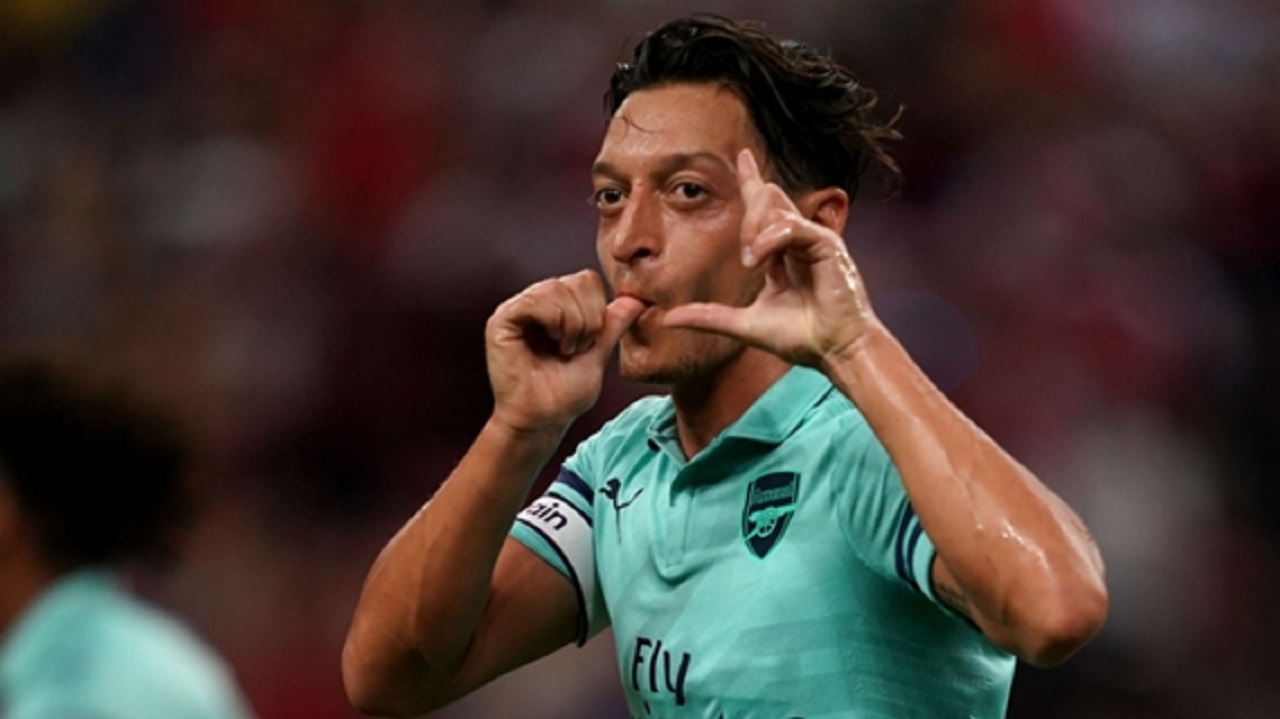 Mesut Ozil scored on his return to the Arsenal starting XI in an emphatic 5-1 International Champions Cup win over an unfamiliar Paris Saint-Germain (PSG) side, while Alexandre Lacazette netted a brace.

Ozil, who captained the Gunners, has had a difficult couple of months that culminated in him retiring from international football last week after growing tired of perceived mistreatment from the German Football Federation (DFB).

That saga stemmed from a pre-World Cup meeting with controversial Turkey president Recep Tayyip Erdogan, but he returned to Arsenal action in successful fashion on Saturday after his country's shock group-stage exit in Russia.

Arsenal were dominant for much of the first period, a spell which essentially began with Ozil's 13th-minute opener at the end of a fine move.

A host of chances went begging thereafter, as Alex Iwobi and Henrikh Mkhitaryan squandered the best opportunities, and PSG briefly made them pay for their profligacy.

Timothy Weah was the inspiration, winning a penalty from Sead Kolasinac, and Christopher Nkunku converted in the 60th minute.

But the Gunners stepped things up again towards the end – Lacazette, who was brought on for Iwobi at the break, scoring twice in quick succession from close range, before Rob Holding and Eddie Nketiah wrapped up an impressive win over coach Unai Emery's former team.

Although PSG's starting XI was packed with young players, they enjoyed a far greater start and almost made the most of their early pressure – Azzeddine Toufiqui sending a curling left-footed effort just wide from 20 yards after a brilliant marauding run from Adrien Rabiot.

Arsenal soon woke up, however, and took PSG's inexperienced defence apart, as Aubameyang latched on to a pass into the right side of the area on the break and squared to Ozil for an easy finish past Gianluigi Buffon.

That ushered in a period of control and they almost got a second in the 23rd minute, but Iwobi was denied when one-on-one with Buffon at the end of a slick passing move.

Buffon was again alert just before the break, saving from Mkhitaryan, who probably should have done better.

PSG improved after the break and deservedly pulled level with an hour played – Nkunku coolly slotting home a penalty after Weah had been clumsily tripped by Kolasinac.

But they were not level for long, as Emile Smith Rowe – the scorer of a stunner against Atletico Madrid – provided a gorgeous right-wing cross a few moments later on his 18th birthday and Lacazette impressively flicked the ball in off the crossbar.

And Lacazette was decisive again 19 minutes from time, nodding in off the post from the middle of the box following a Holding flick-on.

Holding got in on the act in the 87th minute, meeting a corner about 16 yards out and sending a looping header into the top-left corner, before Nketiah rounded off the crushing victory in stoppage time, finishing off a swift break in clinical fashion.