Arsenal 1 Chelsea 1 (6-5 on penalties): Cech the hero against old club 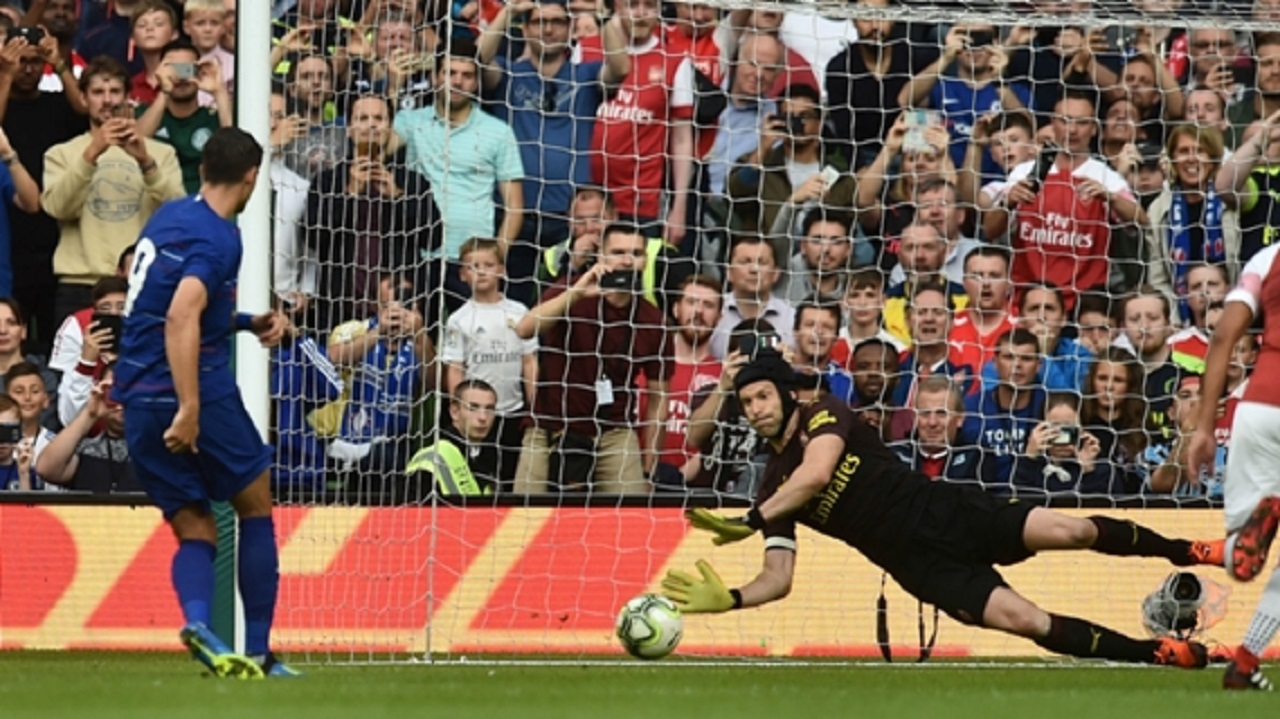 Petr Cech was Arsenal's hero against his former club Chelsea as Unai Emery's side triumphed 6-5 in a penalty shoot-out after a tremendous 1-1 International Champions Cup draw in Dublin on Wednesday.

Callum Hudson-Odoi produced another highly promising performance, the teenage attacker shining as Maurizio Sarri's side failed to make its first-half dominance count due to Alvaro Morata's poor finishing, but it was veteran goalkeeper Cech who would decide the game.

Aaron Ramsey was set to start against the Blues despite being linked with a £30million move to Stamford Bridge - the Wales midfielder withdrawn pre-match due to a calf injury - and that change appeared to unsettle Arsenal as Hudson-Odoi ran riot in the opening period, winning a penalty that was wasted by Morata, who could not beat Cech from 12 yards.

Antonio Rudiger's fifth-minute goal seemed certain to prove the winner at the Aviva Stadium on Wednesday, the Germany international capitalising on poor defending to head home a Cesc Fabregas corner.

But Alexandre Lacazette struck in the 93rd minute to give both sides a further taste of ICC shoot-out action, Arsenal having lost to Atletico Madrid on penalties while Chelsea had previously beaten Inter.

After five perfect spot-kicks apiece, Cech guessed right and pushed away a tame strike from Ruben Loftus-Cheek, allowing Alex Iwobi to step up to ensure Arsenal's ICC campaign ends on a high.

Cech - who spent 11 years at Chelsea - was called into action early, turning over Fabregas' 20-yard drive after Hudson-Odoi got into the box and pulled back a fine low cross.

Chelsea opened the scoring from the resulting corner, though, Rudiger peeling away from slack marking to power home Fabregas' corner.

Morata was given a golden opportunity to double Chelsea's lead when Hudson-Odoi brilliantly beat Hector Bellerin in the box and was fouled, but the Spain striker's poor penalty was easily saved by Cech.

Hudson-Odoi was running the game and Morata should have scored from his perfect cross in the 15th minute but instead misjudged his header, Cech then using his left leg to deny the striker after more terrific work from the livewire teenager.

Arsenal finally found a foothold in the game and, when Henrikh Mkhitaryan slotted a fantastic low cross into the box, Pierre-Emerick Aubameyang somehow failed to convert at the back post.

But it was Hudson-Odoi who was stamping his name on an entertaining contest, Cech quick off his line to deny the 17-year-old after he beat the offside trap.

Arsenal improved after the interval but purposeless passing from Emery's team did not threaten Chelsea, an unmarked Rudiger heading wide from Pedro's corner as Sarri's men sought a decisive second.

A rare poor pass from Jorginho presented Lacazette with a chance to level in the 75th minute but the France forward dragged his shot wide after turning Andreas Christensen and substitute goalkeeper Marcin Bulka then showed his sharpness to plunge low to his right to superbly keep out a first-time strike from Iwobi.

But although Bulka brilliantly denied Lacazette in injury time, the striker turned home a Reiss Nelson low cross from close range to send the tie to a shoot-out.

A pristine set of penalties sent the tie into sudden death but Bulka could not provide more heroics, Cech's save low to his right denying Loftus-Cheek and allowing Iwobi to confidently stroke home the decisive spot-kick.

Chelsea will hope to bounce back when they play Manchester City in the Community Shield on Sunday, with Arsenal facing Lazio in their final pre-season friendly a day earlier.