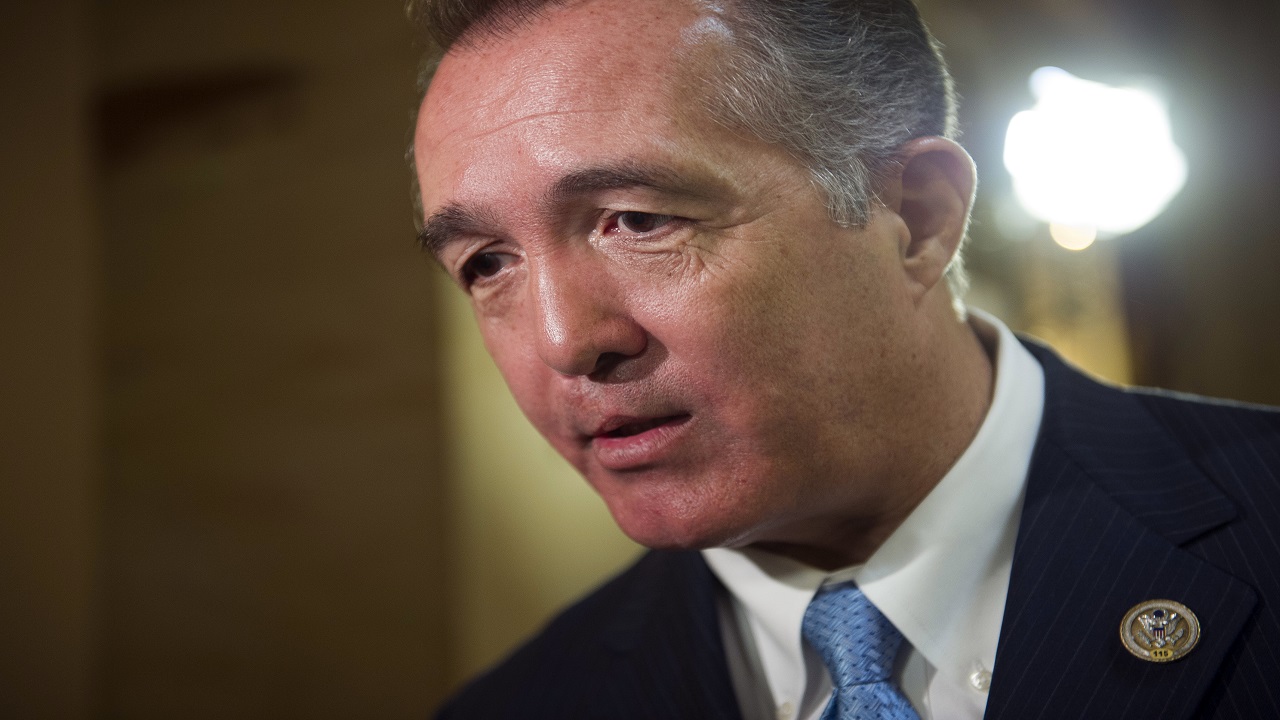 In this March 24, 2017, file photo, Rep. Trent Franks, R-Ariz. speaks with a reporter on Capitol Hill in Washington.

Republican Rep. Trent Franks of Arizona said he is resigning next month after revealing that he discussed surrogacy with two female staffers, creating new political opportunities in a heavily GOP district.

The eight-term lawmaker, a staunch conservative and fierce opponent of abortion, said in a statement Thursday that he never physically intimidated, coerced or attempted to have any sexual contact with any member of his congressional staff.

Instead, he says, the dispute resulted from a discussion of surrogacy. Franks and his wife, who have struggled with infertility, have 3-year-old twins who were carried through surrogacy.

Franks, 60, says he had become familiar with the surrogacy process in recent years and "became insensitive as to how the discussion of such an intensely personal topic might affect others."

He said he regrets that his "discussion of this option and process in the workplace" with two female staffers made them feel uncomfortable.

In a statement, Speaker Paul Ryan, R-Wis., called the allegations "serious and requiring action" and said he told Franks he should resign. Franks said he will step down effective Jan. 31.

At least one Republican, Bob Stump, a former member of Arizona's House and past state utility regulator, has announced his candidacy. The Arizona Republic reports that state Sens. Debbie Lesko and Kimberly Yee also say they're interested in the seat.

Because the vacancy is occurring more than six months before the next general election, Arizona law requires the governor, Republican Doug Ducey, to schedule a special primary election and a special general election.

In a one-page statement late Thursday, the House Ethics Committee said its members were examining whether Franks "engaged in conduct that constitutes sexual harassment and/or retaliation for opposing sexual harassment." The statement provided no further detail and noted that while it was establishing an investigative subcommittee, it did not mean any violation of law or House rules had occurred.

The ethics investigation is unlikely to proceed in light of his resignation.

On Thursday afternoon, Franks was seen being consoled in the House chamber by several other Republicans. They included Texas Rep. Louie Gohmert, Alabama's Robert Aderholt and fellow Arizonan Andy Biggs.

Asked for comment as he left the floor, Franks said, "I'll let the statement speak for itself."

Franks has been a member of the far-right House Freedom Caucus. He's a staunch social conservative who sponsored House-passed legislation to make it a crime for any person to perform an abortion if the age of the fetus is 20 weeks or more.

Earlier Thursday, liberal Sen. Al Franken, D-Minn., announced his resignation after facing allegations of sexual harassment by at least eight women. Franken said some of those accusations were false and that he remembered others differently than his accusers did. He said he'd depart in a few weeks.

Franks drew a sharp response from Democrats during a 2013 House committee debate when he said, "the incidence of rape resulting in pregnancy are very low." He sought to clarify the comment, saying later-term abortions linked to pregnancies caused by rape are infrequent.

Franks is a strong backer of President Donald Trump and has embraced some of his stances on social issues. Franks has harshly criticized some NFL players for not standing during the national anthem, calling them "arrogant and overpaid Lilliputians who dishonor America."

Franks represents a district encompassing suburbs north and west of Phoenix. He serves on the House Judiciary and Armed Services committees.

Before winning election to Congress, he served in the Arizona legislature and founded the Arizona Family Research Institute, an organization associated with Dr. James Dobson's "Focus on the Family." The institute advocates for policies designed to protect children and families.

A senior congressional official said Ryan's general counsel was contacted about two weeks ago by someone with information about "troubling behavior" by Franks directed at a former staffer. The behavior occurred when the staffer worked for Franks, the official said.

Ryan's lawyer interviewed the former staffer and a second former staffer who had a similar complaint that the speaker's office verified through a third party, the official said.

After Ryan brought the claims to Franks, the speaker filed a complaint with the Ethics Committee and asked Franks to resign, his office said.

The official was not authorized to publicly discuss private deliberations and spoke on condition of anonymity.