Angry worshippers lash out against Trump across Muslim world 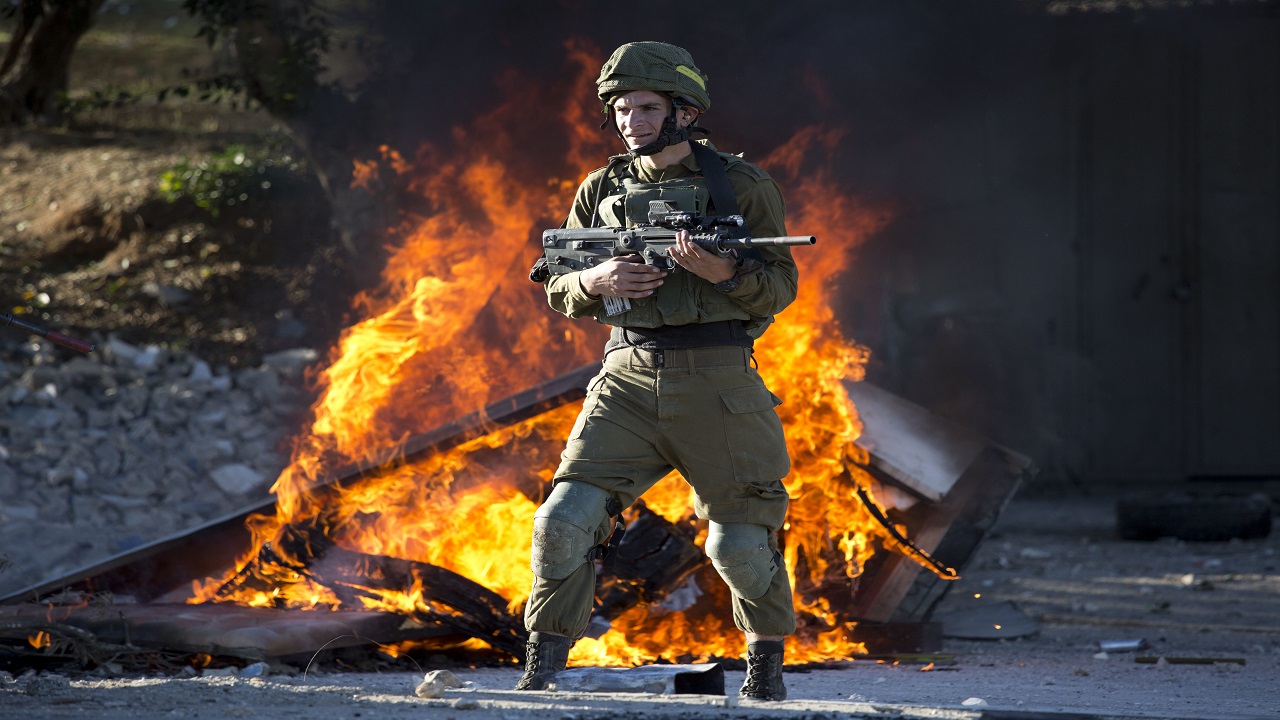 Israeli soldier stands during clashes with Palestinians following a protest against U.S. President Donald Trump's decision to recognize Jerusalem as the capital of Israel in the West Bank City of Nablus, Friday, Dec. 8, 2017.

Large crowds of worshippers across the Muslim world staged anti-U.S. marches Friday, some stomping on posters of Donald Trump or burning American flags in the largest outpouring of anger yet at the U.S. president's recognition of bitterly contested Jerusalem as Israel's capital.

In the holy city itself, prayers at Islam's third-holiest site dispersed largely without incident, but Palestinians clashed with Israeli troops in several dozen West Bank hotspots and on the border with the Gaza Strip.

Dozens of Palestinians in the West Bank and Gaza were hit by live rounds or rubber-coated steel or inhaled tear gas.

Later Friday, the Israeli military said its Iron Dome missile-defense system intercepted a rocket fired from Gaza into southern Israel, but no injuries were reported.

Trump's pivot on Jerusalem triggered warnings from America's friends and foes alike that he is needlessly stirring more conflict in an already volatile region.

The U.N. Security Council was to meet for a special session Friday, with the U.S. expected to face opposition from the 14 other council members.

The religious and political dispute over Jerusalem forms the emotional core of the Israeli-Arab conflict. The ancient city is home to major Muslim, Jewish and Christian shrines and looms large in the competing national narratives of Israelis and Palestinians.

Trump's decision on Jerusalem is widely seen in the region as a blatant expression of pro-Israel bias, but it was unclear if protests and confrontations would maintain momentum after Friday. More extensive violence has erupted in the Palestinian areas in the past, including deadly bloodshed triggered by disputes over Jerusalem.

Palestinian President Mahmoud Abbas' Fatah movement and other groups had called for three "days of rage" this week. However, Abbas remains an opponent of violence, saying it's counterproductive and that he might at some point order his security forces to contain protests.

Separately, Fatah's rival, the Gaza-based Islamic militant Hamas, called this week for a third uprising against Israel, but such appeals have fizzled as Palestinians become more disillusioned with their leaders.

On Friday, demonstrators in the West Bank torched heaps of tires, sending columns of thick black smoke rising over the cities of Ramallah and Bethlehem. Palestinian stone-throwers traded volleys in the streets with soldiers firing tear gas and rubber bullets. Along the Gaza-Israel border fence, Israeli troops fired at stone-throwers.

Across the region — from Asia's Indonesia, Malaysia and Pakistan to North Africa's Algeria and Lebanon in the Levant — thousands of worshippers poured into the streets after midday prayers to voice their anger. Some protesters burned U.S. and Israeli flags or stomped Trump posters that showed the president alongside a Nazi swastika.

In Jordan's capital of Amman, thousands marched through the center of town, chanting "America is the head of the snake."

Pro-Western Jordan is a crucial U.S. ally in the fight against Islamic extremists, but King Abdullah II cannot afford to be seen as soft on Jerusalem. His Hashemite dynasty derives its legitimacy from its role as guardian of the Al Aqsa Mosque in Jerusalem, Islam's third-holiest site.

U.S. Secretary of State Rex Tillerson on Friday played down the impact of Trump's policy shift, which also included a pledge to move the U.S. Embassy in Israel from Tel Aviv to Jerusalem. Tillerson said it will likely take years for the U.S. to open an embassy in Jerusalem.

In a news conference with the French foreign minister, Tillerson said Trump's recognition of the city as Israel's capital "did not indicate any final status for Jerusalem."

The United States is making clear that Jerusalem's borders will be left to Israelis and Palestinians to "negotiate and decide," he said.

Most countries around the world have not recognized Israel's 1967 annexation of east Jerusalem and maintain their embassies in Tel Aviv. Under a longstanding international consensus, the fate of the city is to be determined in negotiations.

Trump's announcement delivered a blow to Abbas, a supporter of the idea of reaching Palestinian statehood through U.S.-led negotiations with Israel. In siding with Israel on Jerusalem, he has said, the Trump administration effectively disqualified itself as a mediator.

However, Abbas has not decided how to move forward, including whether he will rule out future U.S.-brokered negotiations. Trump has said he still intends to propose a Mideast peace deal.

More than two decades of intermittent Israeli-Palestinian negotiations have failed to bring the Palestinians closer to statehood. Some in Abbas' inner circle say the old paradigm, with the U.S. serving as mediator, is no longer relevant.

On Thursday, a senior Fatah official said the Palestinians would not receive Vice President Mike Pence when he visits the West Bank later this month, but it was not immediately clear if the official spoke for Abbas.

The Arab League, an umbrella group of close to two dozen states, is to meet Saturday to try to forge a joint position, followed next week by a gathering in Turkey of the 57-state Organization of Islamic Cooperation.

Turkish officials said Russian President Vladimir Putin will travel to Turkey next week for talks with President Recep Tayyip Erdogan on Jerusalem's status and other issues.