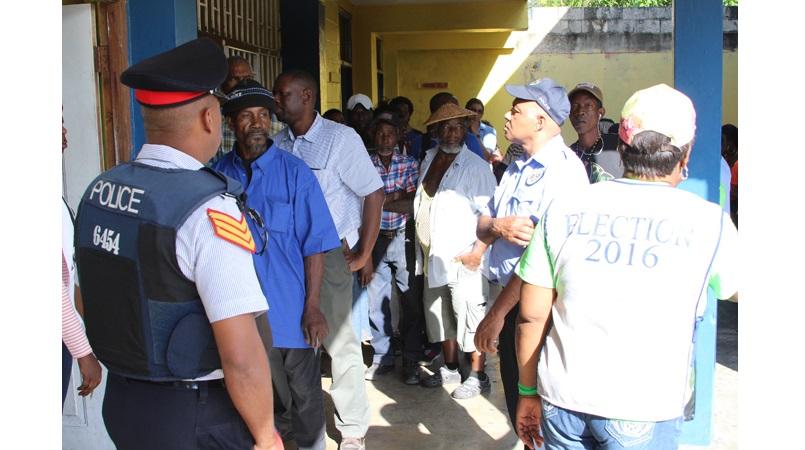 In this file photo from the 2016 general election, voters queue at a polling station in West Rural St Andrew.

The government has sent the clearest signal yet that it intends to have Jamaicans vote in both the general and local government elections on the same date, with the tabling of a motion in the House of Representatives on Tuesday that will amend the Representation of the People Act (ROPA).

Such a move will accomplish two things – it will prevent the electorate from going to the polls twice in the midst of the ongoing COVID-19 pandemic and it will save the government in the region of $700 million.

Leader of Government Business in the House, Karl Samuda, tabled the motion on behalf of Prime Minister Andrew Holness who signalled last month that he was open to the idea of having the two elections at the same time.

Samuda indicated that at the next sitting of the House, the Prime Minister will move to introduce the amendment to the ROPA.

Based on the proposed changes, there must be a minimum of 18 days and a maximum of 30 after nomination day, if the elections are to be held jointly.

The director of elections, Glasspole Brown told a sitting of Parliament’s Public Administration and Appropriations Committee (PAAC) last month that if the Electoral Office of Jamaica was asked to conduct both elections, “We would require additional time; we think we could work with a minimum of 32 days between nomination [and election day]. You're talking about printing two million ballots for the two elections, and you're going to now print four million ballots, and there are a number of additional things that need to be done”.

At the time, Brown pointed to the $2.4-billion that was set aside in the 2020-21 budget for both elections. He said the EOJ’s preliminary estimate was that if the elections were combined “you'd be looking at savings close to three quarters of a billion dollars.”

The parliamentary Opposition has said it is willing to consider the joint polls but that the appropriate laws would have to be amended to facilitate the process.