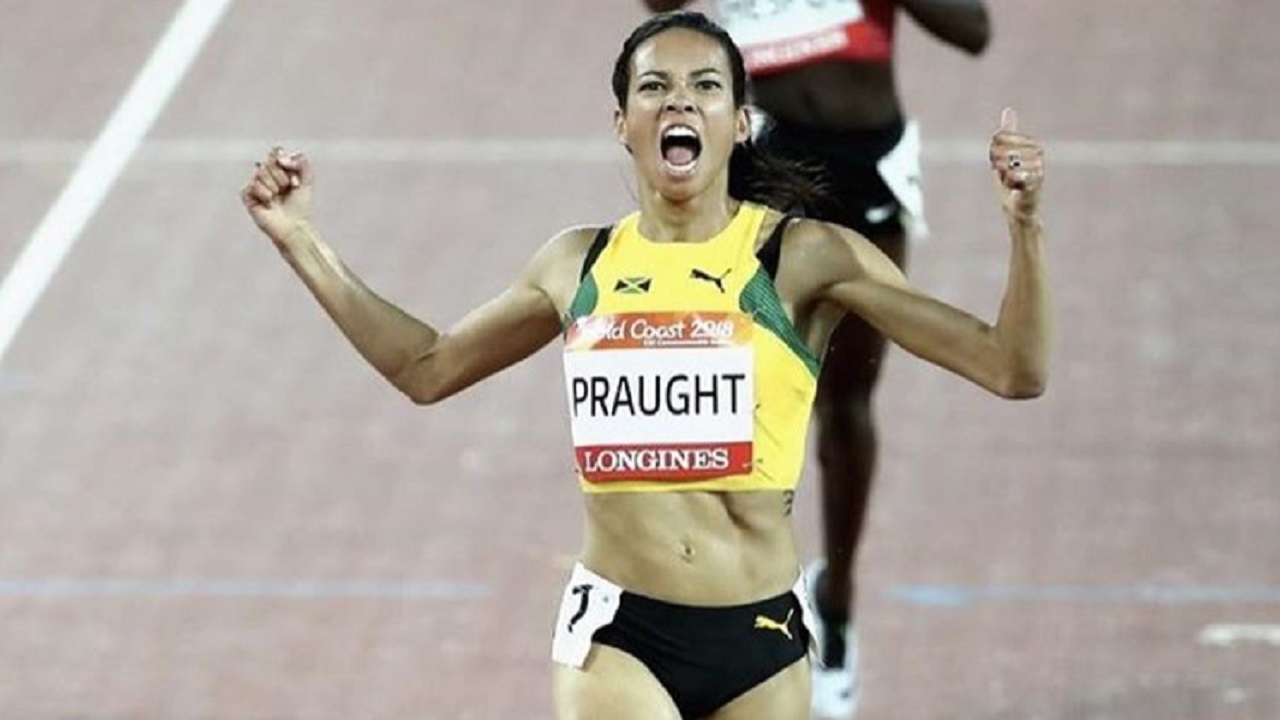 Jamaican Aisha Praught won a surprised gold medal in the women's 3,000-metre steeplechase on Day 7 of the 2018 Commonwealth Games on the Gold Coast in Australia on Wednesday.

Kenyans swept the medals in this event at the last two Commonwealth Games and it seemed another was on the way until Praught made her move on the last water jump and pulled away to win in 9:21.00.

Praught, who trains in the United States with world champion Emma Coburn, said the Jamaicans were going to come back stronger.

Recently retired Usain Bolt arrived on Wednesday as the cheerleader-in-chief for the Jamaicans, and Praught said it would give the team a lift.

"He's been such an amazing role model, even though we couldn't be in further events from each other — you just learn from the greats," she said. "I'm glad he's here. Hopefully he can raise people's spirits."

Jamaica secured two other medals on the day. They had to settle for silver and bronze again when Amantle Montsho won the 400-metre final in the last event of the night.

Montsho won in 50.15, narrowly missing the games record she set in 2010, holding off Anastasia Le-Roy (personal best (50.57) and Stephenie McPherson (50.93) to give Botswana top spot on the podium. It was a double for her country after Isaac Makwala won men's 400 the previous night.

In the men's long jump final, Jamaican Tajay Gayle had a life-time best jump of 8.12 metres but that effort was only good enough for fifth place. The other Jamaican - Demar Forbes -  finished eighth with an effort of 7.88 metres.

Luvo Manyonga of South Africa set a games-record of 8.41 meters to win the gold medal.

Earlier, Jamaica's double Olympic gold medallist Elaine Thompson lost to Shaunae Miller-Uibo in the semi-finals of the women's 200 metres in what is a rehearsal for the final.

The Jamaican got away quickly and caught Miller-Uibo in her immediate outside lane as they rounded into the straightaway. But when Miller-Uibo pushed back, Thompson appeared to let her go.

With the final 24 hours away, neither offered comment as they left the track. Jamaican Shericka Jackson, who won the first semi-final qualified fastest in a career-best 22.20, followed by Dina Asher-Smith of England in 22.44 and Miller-Uibo.

Jamaica will have a third qualifier in the final as Sashalee Forbes (22.93) finished second to Canadian Crystal Emmanuel (22.87) in the third and final semi-final to book her spot.

The men's 200-metre final is also scheduled for Thursday and all three Jamaicans have crashed out at the semi-final stage.

Warren Weir (20.62) had to settle for fourth behind winner Aaron Brown (20.18) of Canada in semi-final one, while Kenroy Anderson was disqualified in semi-final two won by Zharnel Hughes of England in 20.37 and Rasheed Dwyer (20.82) crossed the line fifth behind Trinidadian Jareem Richards (20.41) in semi-final 3.

Without Thompson racing the 100, Jamaica had to settle for silver and bronze on the Gold Coast. Yohan Blake was also upset in the men's 100 and finished with bronze, meaning Jamaica is still awaiting a sprint gold at the games.

The three medals earned on the day pushed the country's total to 12 (3 gold, 5 silver and 4 bronze).