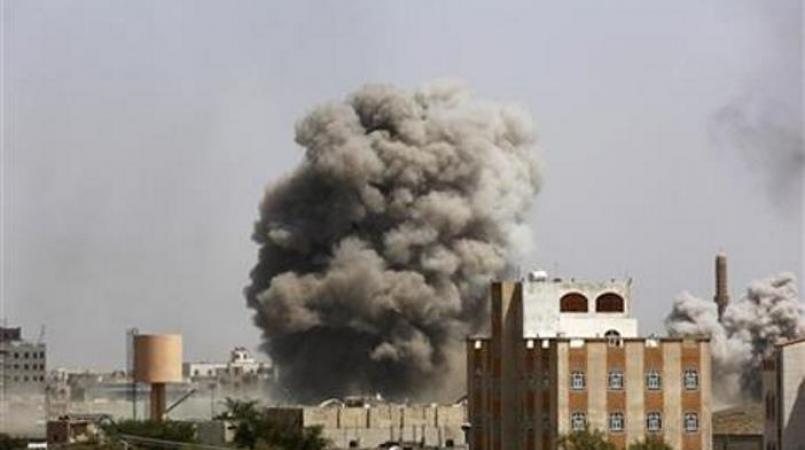 Airstrikes on villages and towns held by the Islamic State group in eastern Syria have killed and wounded dozens a day after an attack by the extremists killed more than 120 pro-government fighters and briefly cut off the highway linking the capital Damascus with eastern Syria, opposition activists said Saturday.

It was not immediately clear if the airstrikes on areas including Mayadeen, Boukamal, Bouleil, Bouomar and Mushassan were carried out by the Russians or the U.S.-led coalition.

The airstrikes came after two days of clashes between Syrian government forces and their allies against IS fighters in central and eastern Syria that left nearly 200 dead on both sides. Syrian troops and their allies have regained most of the areas they had lost earlier.

The Britain-based Syrian Observatory for Human Rights said Saturday's airstrikes and those the night before killed 18 people, including two children and five women.

"They burnt Bouleil overnight," said Omar Abou Leila, of the monitoring group DeirEzzor 24, adding that 13 people were killed in Bouleil and nine others in Boukamal alone.

Activist said that airstrikes on rebel-held parts of northern Syria have stopped after more than a week of bombing that left hundreds of people dead or wounded, according to opposition activists. The attacks on Idlib and Aleppo came after militants launched an attack against government forces on Sept. 19, capturing some areas before losing them.

Russian Defense Ministry spokesman Maj. Gen. Igor Konashenkov said that all attempts by IS and al-Qaida-linked militants to launch offensives in the provinces of Deir el-Zour and Idlib in the northwest were repelled.

Konashenkov said the militants suffered "the most serious losses in months" and their capability has been significantly diminished.

He said that Russian air strikes killed 2,359 militants and wounded about 2,700 others over 10 days starting Sept. 19. He added that the dead and wounded included 16 field commanders.

More than 400 militants from Russia and other ex-Soviet nations were among those killed, he said. Russian warplanes also destroyed 27 tanks, 21 rocket launchers and over 150 other vehicles, said Konashenkov.

He added that the Syrian army under Russian air cover is now completing an operation in the east of Deir el-Zour province to encircle and destroy a group of around 1,500 IS militants who arrived from Iraq.

The Observatory, which tracks Syria's war now in its seventh year, said that over the past two years the Russian military has killed more than 5,700 civilians, 4,258 IS fighters and 3,893 others from insurgent groups.