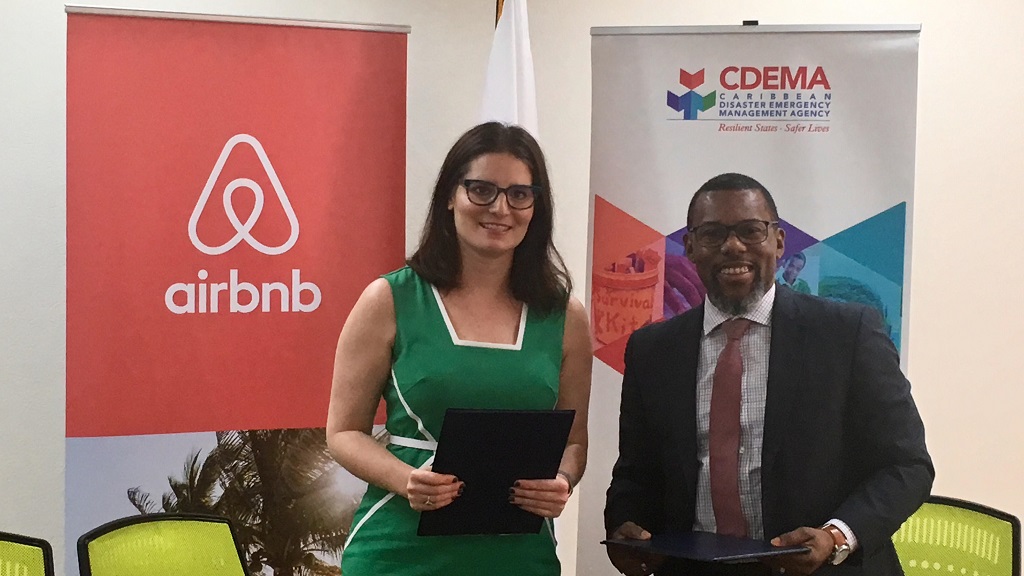 Airbnb and The Caribbean Disaster Emergency Management Agency (CDEMA) have signed an agreement to strengthen emergency preparedness, response, and recovery of host facilities in 18 states across the region.

The signing comes a little over a month before the start of the Atlantic Hurricane season, positioning the organizations to work together during times of peak need.

Through this partnership, Airbnb and CDEMA will work together to provide emergency preparedness and response educational materials to Airbnb hosts, as well as share pertinent information with Airbnb hosts and guests in affected areas during an emergency.

Kellie Bentz, Head of Airbnb’s Global Causes team, and Ronald Jackson, Executive Director of CDEMA, signed the agreement at CDEMA’s headquarters in Barbados. Representatives of the Caribbean Tourism Organization and the Caribbean Climate-Smart Accelerator were also in attendance.

“CDEMA is committed to enhancing national and regional capacities necessary to provide an efficient and effective response after a disaster event. We note that when there is a catastrophic event, shelter becomes a huge necessity both for those displaced from the local population, visitors to the islands and for our humanitarian teams deployed into the field to support the response efforts,” said Jackson.

He said the agency was delighted to partner with Airbnb on their “Open Homes” programme to further diversify options for temporary housing during the response efforts and early recovery phase.

He also said CDEMA is keen on the integration of Airbnb in its information sharing processes.

They will serve as another resource through which we can share critical, preparedness and post emergency information to their stakeholders,” said Ronald Jackson.

Head of Airbnb’s Global Causes, Bentz said Airbnb is committed to expanding its efforts to strengthen communities during times of need.

“That’s why we have been an active partner in disaster-affected regions around the world, including in the Caribbean,” said Bentz. “We are proud to build on those efforts by partnering with CDEMA, to lend assistance where we can and help countries prepare for and quickly recover from emergencies.”

Following 2017’s devastating hurricane season in the Caribbean, where hurricanes Irma and Maria left a path of destruction in more than 12 islands, emergency management support and recovery beyond the initial response are vital.

Specifically, the aftermath of the hurricanes demonstrated one of the most vital needs during response and recovery, which is temporary housing in affected areas. Airbnb’s Open Homes enables hosts to offer their space for free to those persons in need.

Airbnb launched the Open Homes programme in the Caribbean in August 2018, and through their collaboration, Airbnb and CDEMA will work together to develop the operation. The programme facilitates hosts opting into Airbnb’s Open Homes to provide accommodation to emergency service workers or persons displaced as a result of an emergency.

"The Caribbean remains a priority territory for Airbnb, and we look forward to growing our relationship with CDEMA to support countries within the region," said Bentz.

Airbnb has a history of supporting the Caribbean not just in the immediate aftermath, but also in the long-term recovery post-disaster. The company partnered with Puerto Rico throughout 2018 on a series of initiatives to support recovery and economic growth, including a joint marketing campaign, donating fees from three months of bookings, and contributing more than $200,000 in travel credits to relief organizations working on the ground.

CDEMA, established in 1991, is a regional intergovernmental agency mandated to mobilise and coordinate immediate response and relief to any of its 18 Participating States impacted by a disaster as well as promotes an integrated and proactive approach to comprehensive disaster management in the region.

6 stunning Jamaican Airbnbs you and your crew should book now