Agonising week for western Jamaica amid some security success 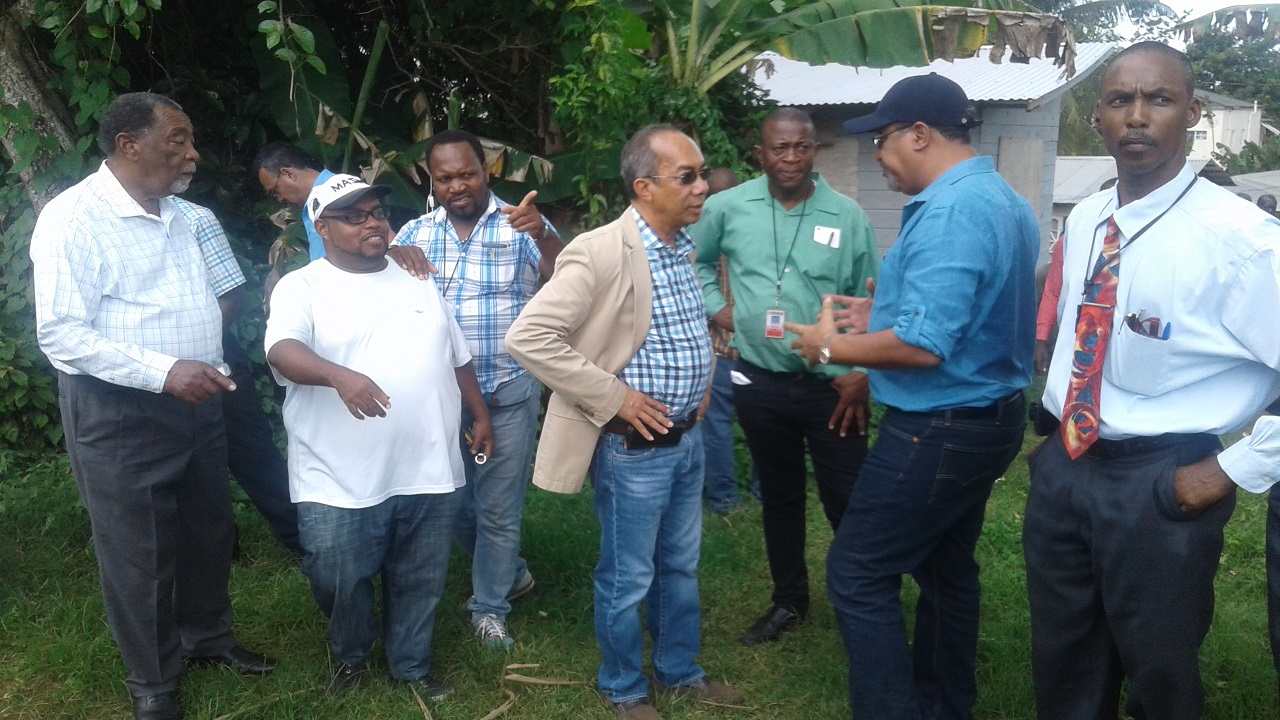 National Security Minister, Dr Horace Chang (fourth left), and Member of Parliament for Western Westmoreland, Dr Wykeham McNeill, are seen locked in conversation among others in Grange Hill on Wednesday following Tuesday's killing of seven persons in the community.

The brutal gun slaying of seven persons, including two boys aged 2 and 12 year, in Grange Hill, Westmoreland took the national spotlight and drew public condemnation even as the 33rd Annual General Meeting of the Caribbean Commissioners of Police (ACCP) was being staged at the Montego Bay Convention Centre in Rose Hall, St James.

President of the Association of ACCP, Michael DeSilva, somehow set the tone for the conference with utterances at the opening ceremony on Monday that, "the most significant issue facing law enforcement in our communities is the rise of criminal gangs.

"Across the Caribbean, gangs, gun violence and drug trafficking all go together, and they represent a common and significant threat to many of our local communities," DaSilva outlined.

The Commissioner of Police in the Bermuda Police Service continued: "The Caribbean has a disproportionate number of homicides that outpaces most of the rest of the world. We must reverse this trend before Iocal gang violence transcends into violent extremism."

The following day, the extreme seemed to have arrived in a most dramatic fashion in neighbouring Westmoreland. There, members of the police hierarchy, led by Commissioner, Major General Antony Anderson, who have for some time been grappling with gang warfare in the parish capital, Savanna-la-Mar, were to be forcibly diverted from the conference in Montego Bay by Wednesday, and kept busy after marauding groups of gunmen went on a shooting spree in Grange Hill, killing seven and injuring about a dozen more persons on Tuesday.

The massacre, which sent shock and fear in the community and kept children out of the classrooms, also prompted a visit to the under-siege community by a team of national security leaders, led by Minister of National Security, Dr Horace Chang, with members of the police hierarchy, headed by Commissioner, Major General Anthony Anderson in support; along with Western Westmoreland Member of Parliament (MP), Dr Wykeham McNeill; other local politicians and other stakeholders.

"What has happened is extremely disturbing to see. There is a 12-year-old and also a two-year-old killed. I can only say we have hit a new low in terms of the brutality of the criminals involved. And as a country, we have to take note of that and act on it," said Dr Chang.

The security minister and the police commissioner both pledged a speedy response to the bloodbath.

"We are going to respond. We are going to protect the citizens of Jamaica and the people of Westmoreland, and we have committed and hardworking members of the security team and they will be assigned here by the commanding officers to do the job. But it is a very serious matter," Dr Chang indicated.

For his part, Major General Anderson noted that there are callous criminals on the loose, who are bent on creating mayhem, and said the police have to provide a similarly strong response.

"There is no shortage of guns that they (hoodlums) have, no shortage of ammunition, and they (are) certainly not shortage of will on their part. It means that our response has to have equal resolve. We have to be as agile as they are.

“We will be conducting a lot of operations to deal with this matter, not just here but generally in other places across the country," Major General Anderson stated.

The police also issued a list of five persons of interest in connection with the Grange Hill killings.

Then on Thursday, a large contingent of members of the security forces swooped down on the Westmoreland communities of Savanna-la-Mar and Grange Hill in search of gangsters, including those who are believed to have been involved in Tuesday's onslaught.

During the security forces’ operations, 94 persons were detained, and 13 alleged members of a Savanna-la-Mar-based gang were being processed. An AK-47 assault rifle, along with a number of assorted rounds of ammunition, were also recovered.

"Since this (Thursday) morning we have detained 94 persons, we have arrested 13 who we have been looking for, who have been wanted for various criminal activities within Westmoreland. Of the list that was put out yesterday (Wednesday) with five wanted persons and five persons of interest, one of the persons of interest has turned in himself, (while) the others haven't," the police commissioner said during a press conference at the Montego Bay Convention Centre on the final day of the 33rd Annual General Meeting of the Caribbean Commissioners of Police.

A day later, another of the persons of interest turned himself in, amid some level of calm returning to the parish.

Meanwhile, head of the Counter-Terrorism and Organised Crime Investigation Branch (C-TOC), Assistant Commissioner of Police, Fitz Bailey, noted that the 13 alleged gangsters were to be transported to Kingston for processing.

"These persons (13 alleged gangsters) were taken in in pursuit of investigations re the anti-gang legislation. In addition to that, there are five additional persons who have been arrested before, and the focus will be on) looking at the organisation and the network from which they are (allegedly) from. In fact, I will tell you that they are from what we call the Dester Street gang. They will be taken to Kingston for further processing," said ACP Bailey.

Since the security clampdown in Westmoreland, another major focus has been directed at St James, where a state of emergency has been on since January 18. There, some nine guns, including four M16 assault rifles, along with other related gears like bullet-proof vests, ammunition and ammunition-loading mechanisms, were found and seized by the security forces a number of operations within a span of only 24 hours.

But amid those successes, the crime monster returned with a fatal gun attack in the heart of Montego Bay, at Sam Sharpe Square, where a female clothes vendor was shot dead, and a man shot and injured, on Saturday night.