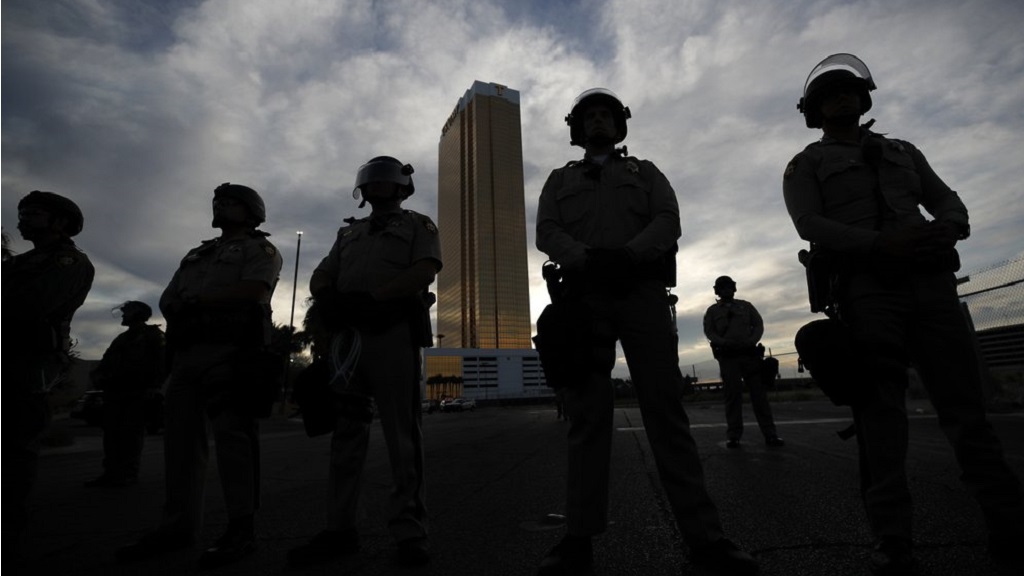 Police stand guard as protesters rally at the Trump Tower, Monday, June 1, 2020, in Las Vegas, over the death of George Floyd. Floyd, a black man, died after being restrained by Minneapolis police officers on Memorial Day. (AP Photo/John Locher)

An unprecedented curfew in New York City did little to prevent destruction as groups of people smashed their way into shops including Macy's flagship Manhattan store, grabbed merchandise and fled.

Police said more than 200 people were arrested and several officers were injured during the chaos Monday night and early Tuesday that followed another day of peaceful protests throughout the city over the death of George Floyd. One officer was struck by a hit-and-run driver in the Bronx and was taken to a hospital in critical condition, police said.

"Some people are out tonight not to protest but to destroy property and hurt others — and those people are being arrested," Mayor Bill de Blasio tweeted late Monday. "Their actions are unacceptable and we won't allow them in our city."

Monday was the fourth night in a row of mainly peaceful daytime demonstrations followed by violence and arrests after nightfall.

But roving bands of people struck stores in Manhattan and the Bronx, even though many stores were boarded up preemptively as merchants feared more destruction.

Video posted on social media showed piles of rubbish on fire on a debris-strewn street and people smashing into stores. Another video showed a group of men hitting a police officer with pieces of wreckage until he pulled his gun and they ran.

People rushed into a Nike store and carried out armloads of clothing. Storefront windows were smashed near Rockefeller Center and wreckage littered the inside of an AT&T store.

The violence threatened to overshadow the anger over the death of Floyd, a black man who died on May 25 after a white Minneapolis police officer pressed a knee on his neck.

"The people who live in New York want New York to end the violence," Monahan said.