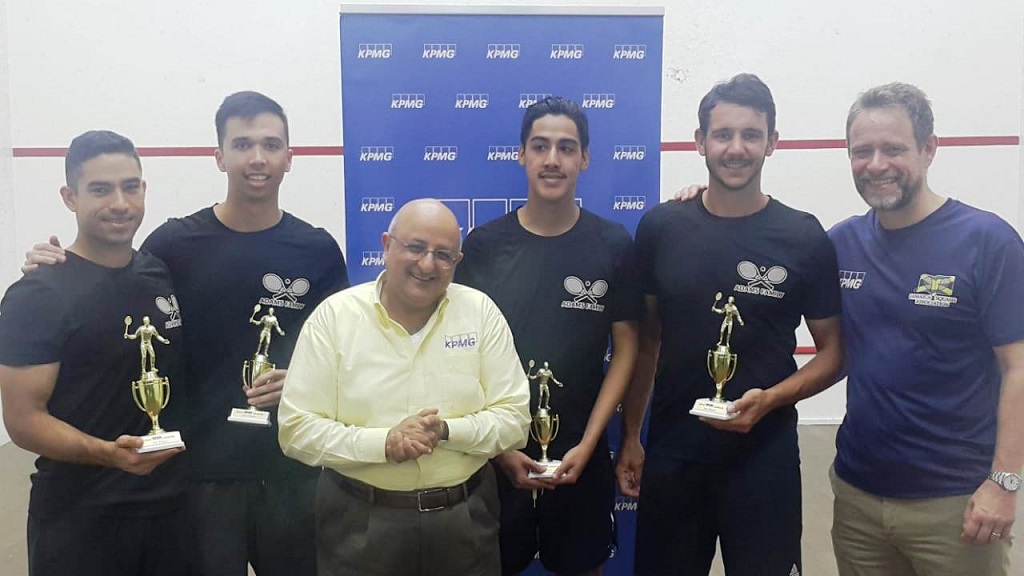 Tarun Handa, (second left) Managing Partner for KPMG in Jamaica, applauds as members of the Adams Family; (from left) Robert Roper, Adam Hugh, Adam Lee and Allan Roper display their trophies after winning the 2019 KPMG Squash League at the Liguanea Club at the weekend. The first time entrants beat the Power Bolts 3-0 to win the title. Also on hand to congratulate the new champions is Chris Hind, President of the Jamaica Squash Association.

First-time entrants, the Adams Family wrote the perfect ending to their Cinderella story when they beat the Power Bolts 3-0 to win the 2019 KPMG Squash League at the Liguanea Club over the weekend.

In a series of hard-fought matches, the Adams Family overcame the determined Power Bolts, with a smart selection strategy and solid on-court play.

First up to play was Allan Roper who had to fight for every point against Mia Todd in a battle that had spectators on the edge to the very last point.  After Todd took the first game, Roper came back to win the next two only to have Todd rally to take the fourth.  The fifth game was a slugfest but Roper held off his opponent to take a 15/21, 21/19, 21/17, 20/21, 21/20 win and put his team in the lead.

However, it looked like the Power Bolts would pull even when Dylan Vaz appeared to have Adam Hugh on the ropes after firing his way through the first two games of the second match.  But by the third game, Hugh adjusted his game plan, turned the tables on his opponent and came back to win 14/21, 14/21, 21/16, 21/16, 21/18 and secure the championship for the Adams Family.

Although the overall outcome had already been decided, former All Jamaica Under 13 Champion, Aman Dhiman fought hard against Adam Lee as he endeavored to win one for the Power Bolts.  But Lee’s experience and dexterity proved too much for the youngster and Lee won 21/18, 21/19, 21/19 to secure the sweep for the Adams Family.

President of the Jamaica Squash Association, Chris Hind said, “we couldn’t have asked for a more exciting end to the tournament, with two first time entrants going all the way to the finals and then giving us a great showdown. The Adams Family gave a solid display of clinical and competitive squash and although the Power Bolts didn’t come through they fought like lions and did themselves proud.”

Managing Partner for KPMG in Jamaica, Tarun Handa said, “this is our 20th year serving as title sponsors of this tournament and we continue to support it because it brings out competitors of all ages and skill levels and gives everyone the opportunity to compete on the same stage and as a result we see the players at their very best.”