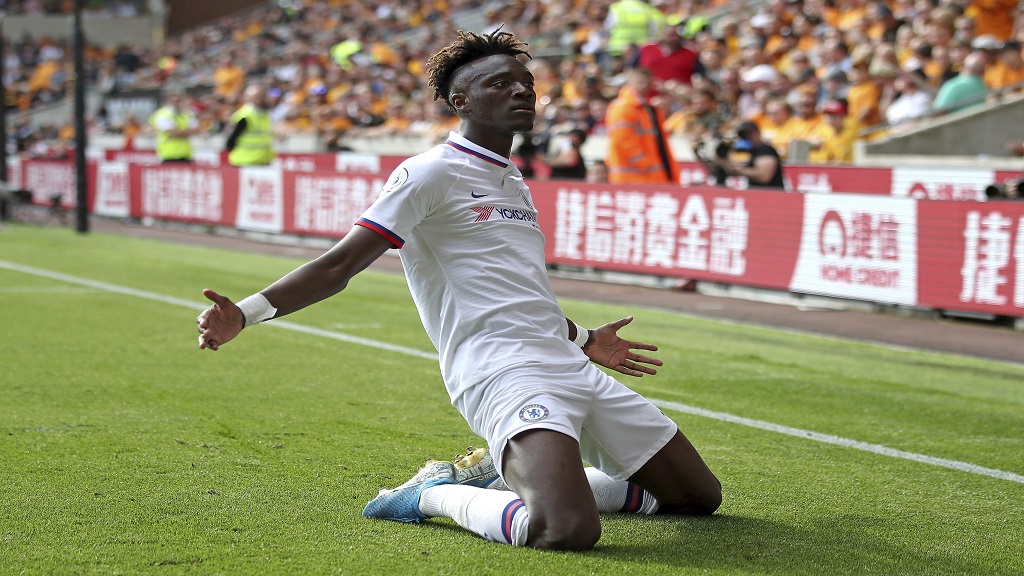 Tammy Abraham continued his fine form by scoring a hat-trick as Chelsea defeated Wolves 5-2 at Molineux on Saturday.

After doubles against Norwich City and Sheffield United, Abraham became the youngest Chelsea player to score a Premier League hat-trick in a brilliant display.

Fikayo Tomori got his first goal for the Blues with an ambitious 25-yard shot that wrong-footed Rui Patricio and swirled into top-left corner, with Abraham making it 3-0 before the break.

Abraham followed his treble with an own goal, while an effort from Patrick Cutrone gave Wolves the faintest of hopes before Mason Mount curled home a fine finish in the 96th minute to cap the win.

After a low-key start to proceedings, Tomori's ambitious effort caught Patricio off guard and sailed home in the 31st minute.

Tomori then fed Mount, who appeared to be fouled in the box. However, play continued and a kind ricochet was instinctively dispatched by Abraham on the turn.

Abraham pounced again four minutes before half-time, getting in front of Conor Coady and powering a header from Marcos Alonso's cross beyond Patricio.

Antonio Rudiger, making his return from a month out with a knee injury, made way for Kurt Zouma at half-time but Abraham kept Chelsea in the ascendancy by flicking the ball past Coady and picking out the far corner in the 55th minute.

Romain Saiss helped give Wolves hope with a header that Kepa Arrizabalaga could only palm into the net off Abraham, who later hobbled off after an awkward landing.

However, Mount, who earlier failed to slot into an empty net after rounding Patricio, cut inside Jesus Vallejo and swept in a fine finish to settle matters.

What does it mean? Adaptable Lampard learns his lesson

After Sheffield United and their three-man defence came from two goals down to claim a draw at Stamford Bridge before the international break, Frank Lampard was unwilling to make the same mistake and select a back four.

While the Blues did brilliantly to restrict Wolves in the first half, the concession of two second-half goals will be a cause for concern.

Lampard reminded the in-form Abraham in his pre-match news conference that Olivier Giroud and Michy Batshuayi are desperate to replace him and spearhead Chelsea's attack.

The England international heeded the warning, joining Cristiano Ronaldo and Dele Alli as the only players aged 21 or younger to have scored two or more goals in three consecutive Premier League games.

Wolves captain Coady showed a lack of awareness when Abraham got in front of him to nod in his second and he was caught flat-footed when the Chelsea striker breezed past him to wrap up his hat-trick.

Chelsea make their return to the Champions League when they entertain Valencia on Tuesday, while Wolves are in Europa League action at home to Braga two days later.