Skip to main content
Breaking News |
Caymanas Park tips - Saturday, November 28
Damion Lowe signs with Egyptian club
PM announces call out of National Reserves to assist with crime fight
One COVID-19 death, 69 new cases in Jamaica
JUTC bus cleaner dies in crash inside company’s Portmore depot
Motorists urged to exercise caution where traffic lights are out- NWA
Quarrie set to battle with Gayle in homestretch for JAAA presidency
All antigen tests must be ordered by a doctor- MOHW
Quarrie upset about still not getting list of voters for JAAA election
Two men in custody in relation to killing of Manchester businesswoman 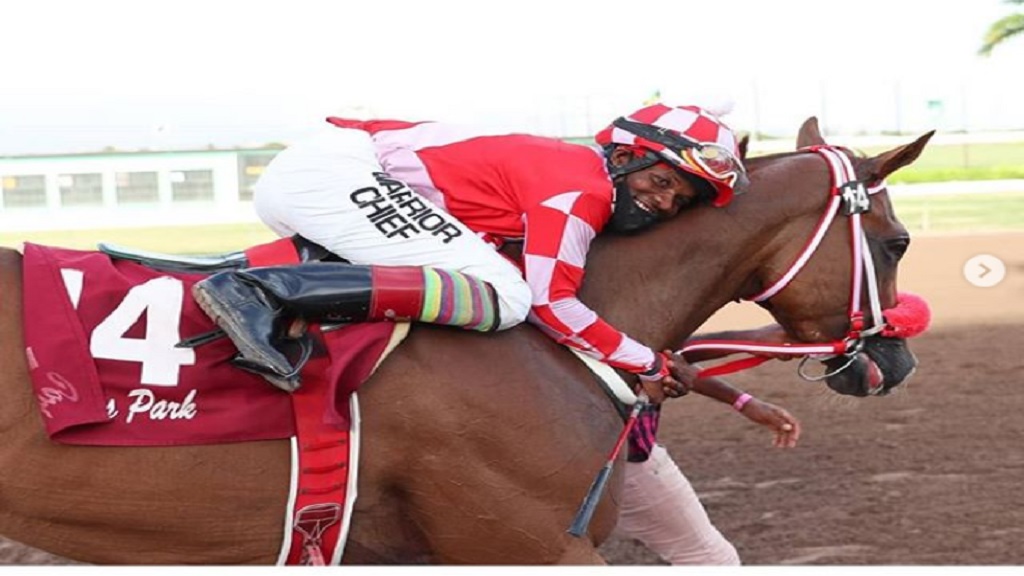 Above And Beyond with jockey Dane Nelson. (PHOTO: caymanasracing.com).

The Anthony Nunes-trained ABOVE AND BEYOND won the 1000 Guineas at Caymamas Park on Saturday, closing a four-timer for the champion trainer and three winners for leading rider, Dane Nelson, all for Nunes, on the 11-race card.

Reproducing her seven-furlong bullet exercise gallop, taken to task after finishing fourth in her Guineas prep, the big 1-5 favourite ABOVE AND BEYOND, took the fight to ANOTHER AFFAIR from the gate, tackling early leader ANOTHER PROSECUTOR as a team down the backstretch, turning the one-mile event into a two-horse race.

ANOTHER AFFAIR, a runaway winner in her prep race, was scorched on the lead in a six-furlong split of 1:10.2 and was always running for second-money from the top of the straight.

ABOVE AND BEYOND completed the mile in 1:38.4, winning by six and a quarter lengths.

Nunes, whose GLOCK and SENCITY finished third and fourth, respectively, continues to distance himself from his peers as he defends his first trainers' title.

Teaming up with Nelson to open his account with GENERATIONAL in the third for three-year-old maidens at five and a half furlongs, Nunes bagged his second winner in the fifth with last year's Triple Crown winner, SUPREME SOUL, who rallied in deep stretch  to outstay rivals at nine furlongs and 25 yards with Shane Ellis astride.

Nelson enjoyed an armchair ride aboard Nunes' speedy KJ EXPRESS to thwart in-form SUPERBOLT at five and a half furlongs in the seventh among $450,000 claimers.

The 1000 Guineas is the first Classic of the local racing season and was contested over three months late because of the coronavirus pandemic.

Racing continues at Caymamas Park on Sunday with a showdown between Ian Parsard's MAHOGANY and Gary Subratie's WOW WOW in the 2000 Guineas.