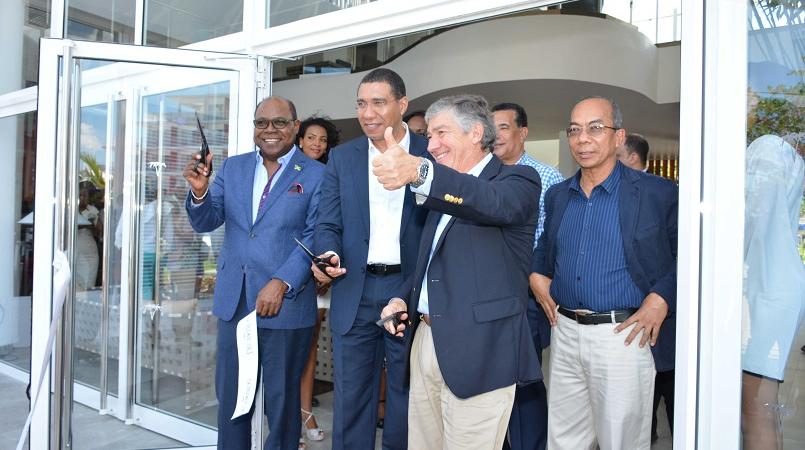 The need for a transformation was highlighted by Minister Bartlett and Prime Minister Andrew Holness at the official opening of the 146 room Royal Decameron Cornwall Beach Resort in Montego Bay recently.

Discussions will be had with stakeholders about building out the new Hip Strip, said Minister Bartlett whose dream for the popular Montego Bay location “is for the Strip to be extended from ‘Dump Up Beach’ all the way to Dead End with a series of experiences of entertainment, and food and shopping that will remind us of City Walk in Orlando.”

Minister Bartlett said through its expansion Decameron is helping to enhance the Hip Strip experience.

He stressed that “part of that experience will see another 350 rooms coming on stream when Spanish Court Montego Bay is completed next to Decameron, Sea Gardens with another 80 rooms, the introduction of Deja Resort and on the entertainment side, Tracks and Records and the redevelopment and repositioning of Coral Cliff.”

“On the physical development side, we are looking at how we can reconfigure the area and among the first low-hanging fruits that we’re dealing with is to change the cable arrangement that will remove all the overhanging utility wires and put them underground so that we begin with a physical look that is different,” Mr. Bartlett disclosed.

He added that $11 million had already been allocated for preliminary work to be done on that project before the completion of the current fiscal year. “We are going to do some street-scaping and starting from the corner of Summit Police Station heading back to Dead End we have allocated some $35 million to give us a nice good finish and a good look as we go along that corridor,” the Minister announced.

Prime Minister Holness also spoke to the need to prepare Montego Bay for the next 50 years. “The product is growing, it is expanding; the challenge with that is that the supporting infrastructure, much of this was laid 50 years ago (and) cannot sustain the next growth spurt of 50 years to come,” he noted.

He said the area had the potential to be better than all the other Hip Strips to be found in places like Miami and Copacabana “but it will require the stakeholders, including the Minister, the Members of Parliament, the Local Government, the owners and developers, including the owners of properties who may not see the necessity of using those properties in a strategic development thrust, to come together as team Jamaica to build a tourism product that will last for the next 50 years and place Jamaica as the lead island for tourism in the Caribbean region.”