40 win with Salada Foods Rise Up and Run loyalty card 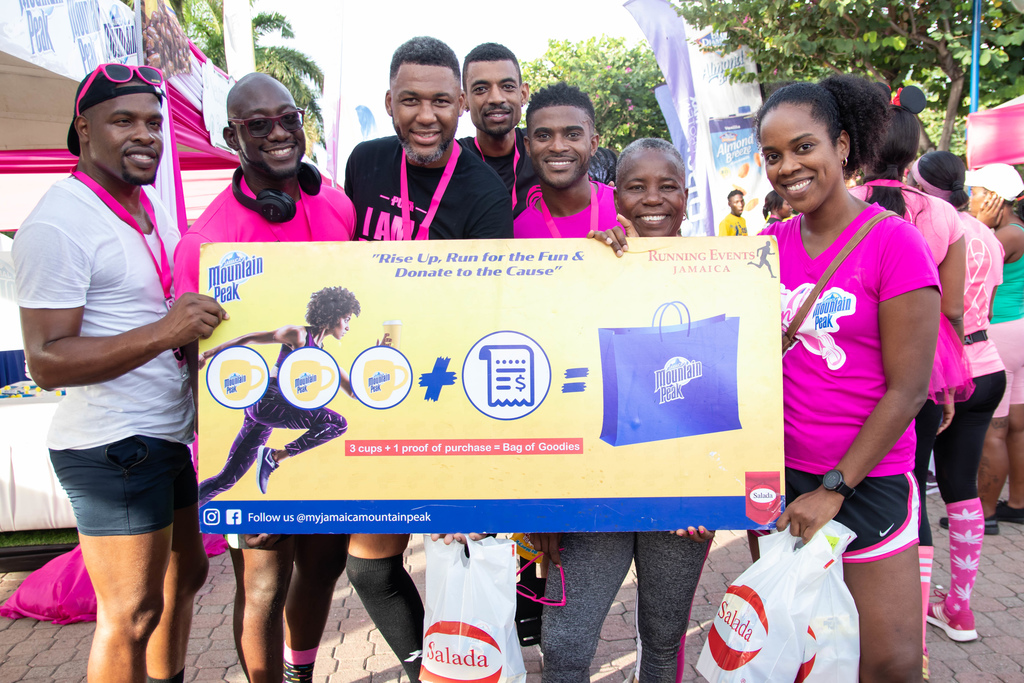 Tamii Brown (right), commercial and corporate affairs manager at Salada Foods Jamaica celebrates with a few of the Salada Rise Up and Run winners at the ICWI Reach to Recovery Pink Run at Emancipation Park on Sunday, October 27, 2019.

Twenty-eight Salada Rise Up and Run winners laced up for the 19th staging of Reggae Marathon on Sunday, December 8.

The group forms part of a group of 40 winners in the inaugural Salada Rise Up and Run loyalty card launched by Salada Foods Jamaica in partnership with Running Events Jamaica.

The winners were patrons, who participated in at least three of the eight selected Running Events Jamaica races announced with the loyalty card in March. Qualification commenced by simply visiting the Jamaica Mountain Peak booth at the races, for a complimentary cup of coffee or ginger tea in order to get a stamp on their card.

The Marathon, Half Marathon and 10K which started at Long Bay Beach Park, situated along Negril’s famed seven-mile white sand beach, looped into the town of Negril then headed north towards the town of Green Island. The mostly flat course is an International Association of Athletics Federations-certified marathon, half-marathon and 10K course.

According to Tamii Brown, commercial and corporate affairs manager at Salada Foods Jamaica the positive response to the programme launched in March 2019 was quite overwhelming.

“The take up was overwhelming and the support for the charities over the year was heartening. All of the 5ks are set up to give back to charitable causes and help to build up Jamaica. With over 200 runners signing up in March, we saw so many willing to rise up and support. Salada Foods was happy to give them an extra perk at these races,” Brown said.

Managing Director of Running Events Jamaica, Alfred ‘Frano’ Francis, expressed his delight at the success of the programme and partnership with Salada Foods.

“This partnership with Salada Foods truly enriched the overall experience of our patrons,” stated Francis. “Through their Jamaica Mountain Peak brand they provided a no-hurdles entry for each Jamaican to rise up and support worthy causes. We are even more delighted that they saw the value of participation in Reggae Marathon as a part of their prize package,” concluded Francis.

For Marlon Longmore, one of the first winners in the Rise Up and Run programme, a little recognition goes a long way.

For Dwight Baker, the call of the Reggae Marathon was strong.

“I started running a little over two years ago and went to Reggae Marathon last year,” shared Baker. “So, when I heard that for giving I’m receiving, I jumped at the opportunity. I’ve always bought Salada Foods coffees, especially when I have visitors. To be one of the first winners makes me really happy.”

Reggae Marathon also offers its own suite of rewards.

And at the close of an exciting morning, the Salada Foods Rise Up and Run winners walked away with third place Reggae10K Team Championship - Female award.

PHOTOS: Reggae Marathon off and running