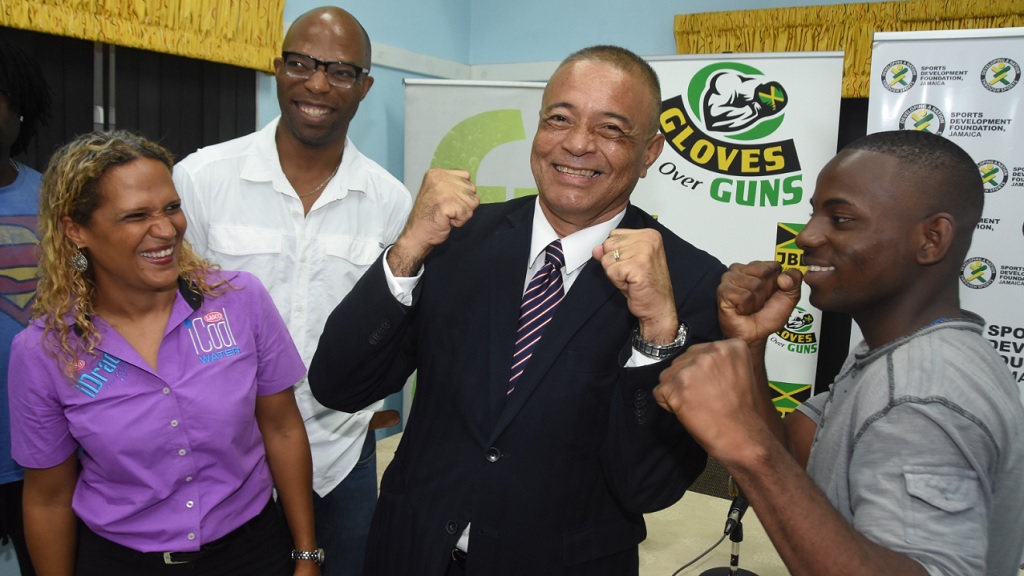 Junior boxer Arnold Anderson (right) shows His Excellency Alexis Sandoval (centre), Ambassador of Panama to Jamaica how to set his guard at the launch of the Gloves over Guns community-based intervention programme. Looking on are Danielle Cunningham, beverage marketing manager, LASCO Distributors Limited and Stephen “Bomber” Jones, president of the Jamaica Boxing Board.

An eight-bout amateur fight card will highlight the third staging of the Gloves over Guns community initiative on Saturday at the Stanley Couch Gym.

Three of the eight bouts will feature boxers from Jamaica and Panama facing off.

The fight card was launched on Wednesday at the offices of the Sports Development Foundation (SDF).

It was also disclosed that LASCO distributors will support the third staging of the initiative through $200,000, in addition, to its ICool water and IDrade hydration fluid.

This staging comes on the heels of the successful inaugural event in Denham Town and the second in Montego Bay on October 6 and November 17, respectively.

According to Stephen “Bomber” Jones, president of the Jamaica Boxing Board, LASCO’s endorsement signals that the programme is landing the correct punches.

“LASCO coming on board helps them (junior boxers) in many different ways,” Jones said.  “It helps them to validate what we are doing and the stance that we are taking because LASCO chooses carefully what they align themselves with.”

Robert Napier, coach of the St Thomas Boxing Club, welcomed the nutritional boost the young athletes would get from the brand.

Napier, who has trained children from the Denham Town and Trench Town communities for the past five years said, “I have put in a lot of work and I have seen where boxing has helped a lot of them (youth) to change their behavioural patterns in the right direction."

“I’m excited to see LASCO come on board because, over the years that we have the programme, we train these kids and a lot of them are from financially unstable backgrounds, and to develop good boxers they need a proper nutrition programme,” Napier further said.

LASCO beverages marketing manager Danielle Cunningham said it was necessary for LASCO to endorse the event.

“At our core, LASCO is driven by the belief that through community-based intervention, we can transform the way our most vulnerable Jamaicans access resources and become productive citizens,” stated Cunningham. “The inspiring work executed by the Jamaica Boxing Board of Control (JBBC) through Gloves over Guns has not only touched our hearts but has moved us to action.”

One of the competitors, 16-year-old junior boxer Arnold Anderson, expressed confidence ahead of the fight card.

“I am a national boxer for the Jamaica Boxing Board. I’ve been to Guyana for the schoolboy competition, so I am an experienced boxer. I am very confident. I have been training hard with my coach, working on my weak areas and boosting my strong points,” the teen said. “I am very confident, and I think I will win when I compete against Panama.”

Salas destroys Moncrieffe to set up Contender final against Holmes