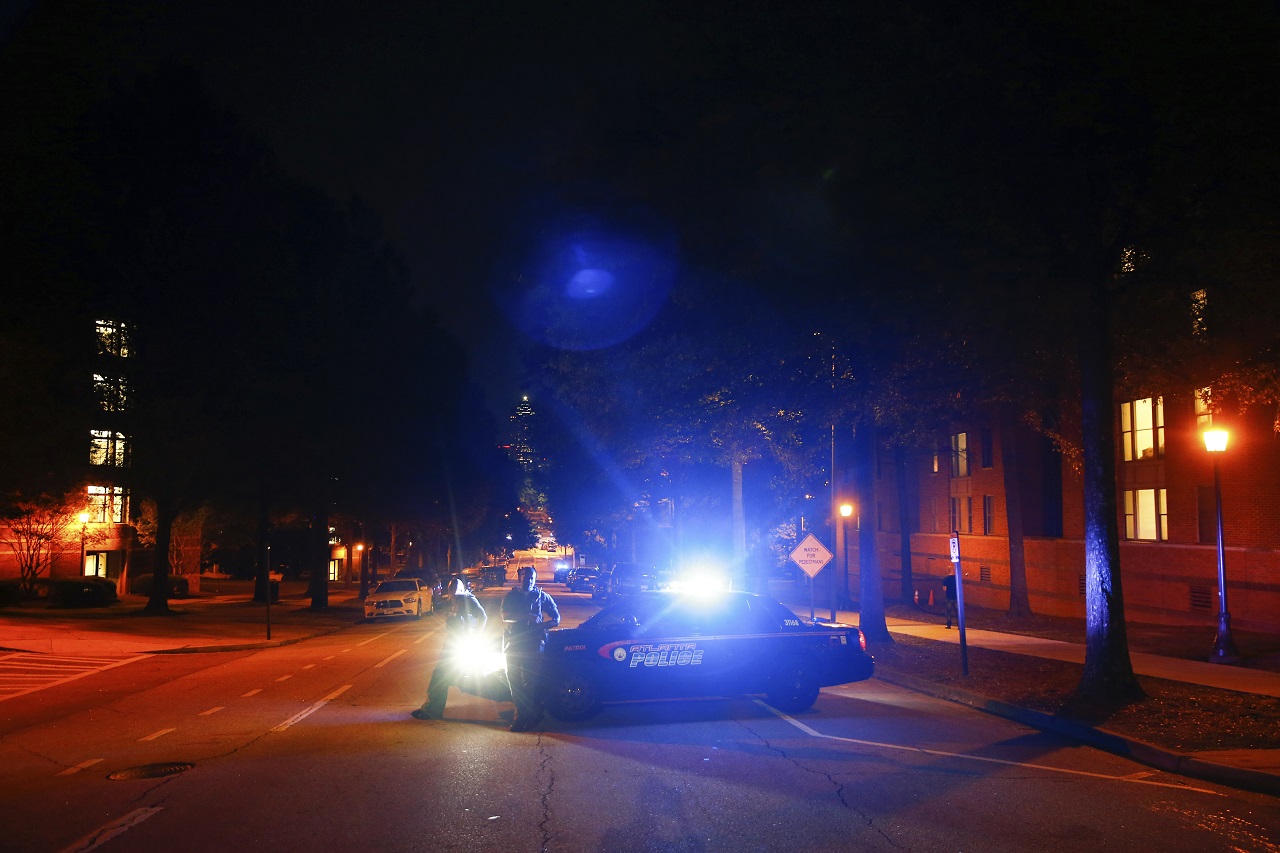 Police block off streets in front of a police station at Georgia Tech where protests happened earlier and at least one police car was burned on Monday, Sept. 18, 2017, in Atlanta.

Georgia Tech hasn't identified the officer who fired the fatal shot and has refused to release any information about the officers who confronted Schultz.

On Monday night, Georgia Tech issued alerts urging students to shelter indoors because of violent protests. Video posted on social media showed a campus police vehicle burning in the street and officers pinning people to the ground as onlookers shouted at them.

After Monday's peaceful vigil, about 50 protesters marched to the campus police department, university spokesman Lance Wallace said. A police vehicle was burned and two officers suffered minor injuries, with one taken to a hospital for treatment and later released.

Georgia Tech president G.P. "Bud" Peterson in a letter to the university community Tuesday said he believes the problems were caused by people "intent on creating a disturbance and inciting violence."

"We believe many of them were not part of our Georgia Tech community, but rather outside agitators intent on disrupting the event," he added. "They certainly did not honor Scout's memory nor represent our values by doing so."

The university said three people were arrested during the protest but hasn't said whether they were students.

The GBI has said an officer responding to a 911 call about 11:17 p.m. Saturday shot Schultz as the student advanced on officers with a knife and refused commands to put down the knife. Stewart said Monday that the GBI confirmed to him that Schultz was holding a multipurpose tool and that the knife blade was not out.

Stewart says he plans to sue over the shooting.

Schultz was the one who called 911, GBI spokeswoman Nelly Miles said in an emailed statement Monday.

"In the call, Shultz describes the person as a white male, with long blonde hair, white T-shirt and blue jeans who is possibly intoxicated, holding a knife and possibly armed with a gun on his hip," Miles said, adding that three suicide notes were found in Schultz's dorm room.

Georgia Tech has refused to release the 911 audio.

Investigators recovered a multi-purpose tool at the scene but didn't find any guns, Miles said.

Peterson, in his letter Tuesday, called Schultz's death a tragic loss but urged people to await the results of the investigation and "not draw conclusions too quickly."

Schultz was president of Pride Alliance at Georgia Tech. The fourth-year computer engineering student used the name Scout, rather than the given name Scott, and preferred the pronouns "they" and "them" rather than "he" or "him."

William Schultz told reporters Monday that his child had a 3.9 GPA and was on track to graduate early in December.

Lynne Schultz told the Journal-Constitution over the weekend that her oldest child had struggled with depression and attempted suicide two years ago.