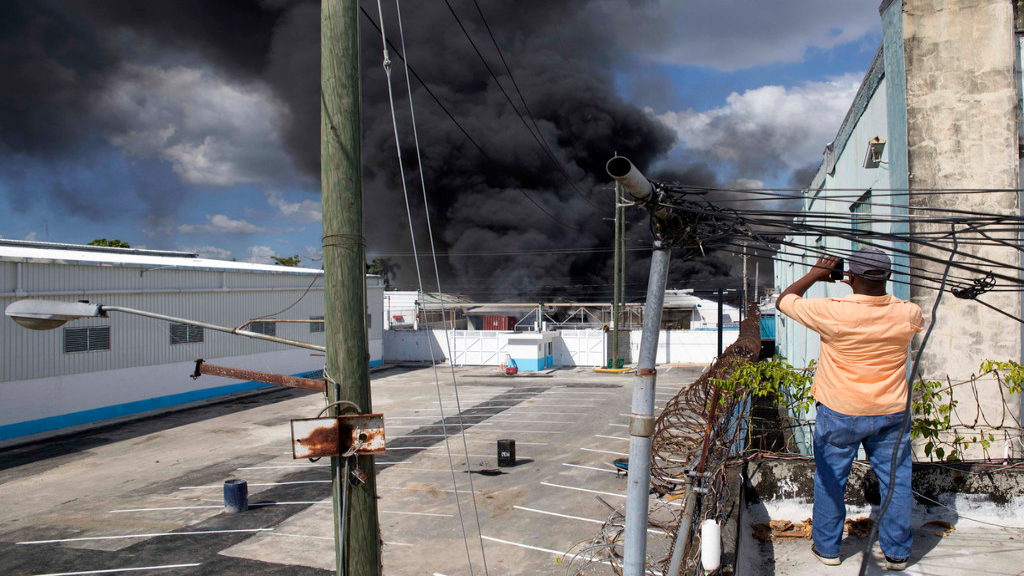 A resident makes a photo from a rooftop, of a black plume of smoke caused by a nearby explosion at the Polyplas plant in the Villas Agricolas neighborhood in Santo Domingo, Dominican Republic, Wednesday, Dec. 5, 2018. The mayor told reporters the fire began when a boiler exploded early Wednesday afternoon at the plastics company. Authorities say at least two people have died. (AP Photo/Tatiana Fernandez)

A big explosion tore through a plastics company in the Dominican Republic's capital Wednesday, and authorities said at least three people died and 44 were injured.

Among the injured were 13 children at a school in front of the Polyplas company where the explosion occurred, Maria Gomez, a spokeswoman for the country's National Health Service, told The Associated Press.

Santo Domingo Mayor David Collado told reporters that a boiler exploded and set off a fire at the company in the Villas Agricolas neighborhood. He said the fire had been contained.

Police 1st Lt. Jose Francisco Velez told the AP by phone that authorities were still searching for victims underneath a wide swath of concrete rubble.

"They're still lifting the bodies," he said.

Gomez said the injured included three adults who were in critical condition with second- and third-degree burns. He said the injured were being treated at several hospitals in the capital, prompting some facilities to postpone elective surgeries to handle the influx.

The owner of Polyplas, Manuel Diez Cabral, posted several messages on Twitter saying that authorities were trying to determine what happened.

"We deeply regret the tragedy," he wrote. "We still do not know the magnitude of the loss."

Diez did not immediately return a request for comment.

Watch: At least 10 killed in blast at vocational college in Crimea