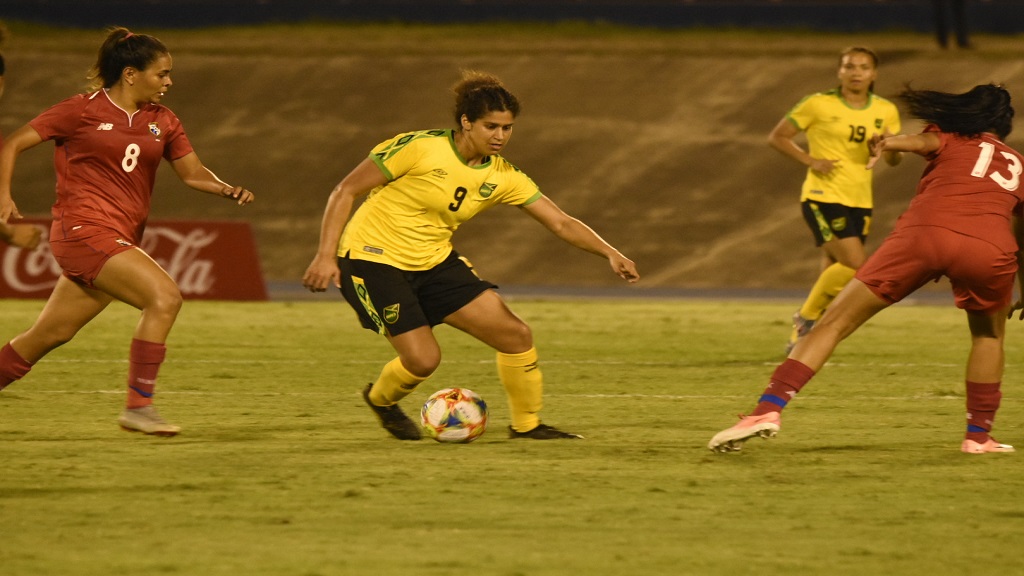 Reggae Girlz midfielder Mario Sweatman dribbles away from two Panama defenders during their international friendly match at the National Stadium on Sunday, May 19, 2019. Sweatman is one of 16 players from the squad selected for the game against Panama who will travel to the World Cup in France.

Led by the 2018 Guardian Footballer of the Year, striker Khadijah Shaw, the squad contained no major surprises.

Menzies, who is still waiting for FIFA clearance for 26-year-old Havana Marguerite Solaun, who plays as a midfielder for Norwegian club Klepp IL, has until May 24 to submit to FIFA his 23-member squad.

The 22-member squad was released three days after the Reggae Girlz defeated Panama 3-1 in an international friendly match at the National Stadium, in Kingston, a match that served as a farewell for the Jamaicans before the women’s World Cup.

Panama was also the team the Reggae Girlz defeated in a penalty shoot-out to qualify for France.

The squad includes 16 players who were in the 20-member team for the Concacaf Women's Championships in the USA, which acts as the qualifying tournament for the 2019 FIFA Women's World Cup.

Missing out from the squad that took part in the World Cup qualifiers are Christina Chung, Giselle Washington, Shanise Foster, and Jadyn Matthews.

“The JFF is extremely proud of the achievement of the Girlz who are a true representation of what makes us Jamaicans. We are also proud of the coaching and other supporting staff who together make a fantastic unit,” President Michael Ricketts said in response to the naming of the squad.

“Based on the makeup, capabilities and ambassadorial spirit of the players and staff, the Federation is absolutely confident that the country will be represented with pride. We must also point out that none of this would have happened without the commitment and sacrifice of those Girlz who battled for us in the qualifiers but will not be a part of the group for France, we express sincere thanks to those Girlz also” Ricketts added.