2019 Manning Cup finalists to be decided on Wednesday 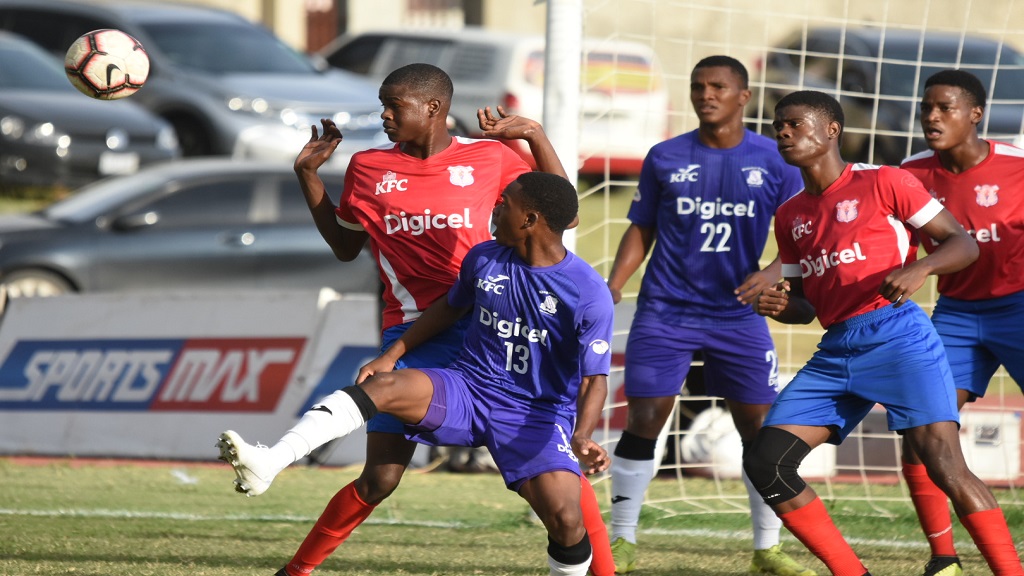 Action between defending champions Kingston College and Camperdown High in their final quarter-final round match of the 2019 ISSA/Digicel Manning Cup competition on Tuesday, November 12 at the Stadium East field. KC won 2-1 to qualify for the final. (PHOTOS: Marlon Reid).

The 2019 urban area ISSA/Digicel Manning Cup football competition is nearing its business end and with the quarter-finals done and dusted, semi-finals and final awaits.

The penultimate round, which is the semi-finals, takes place on Wednesday at the National Stadium in Kingston and will see Kingston College (KC), Jamaica College (JC) and St Andrew Technical High School (STATHS) returning to this stage for the second straight year. Wolmer’s Boys complete the semi-finals line up.

STATHS will face Wolmer’s Boys in the first semi-final at 3:00 pm, whereas defending champions KC will take on JC, the most successful school with 29 titles, in the second semi-final at 5:00 pm.

KC boost the best record this season as they are the only team of the four yet to taste defeat in any competition. That's a team with championship qualities. 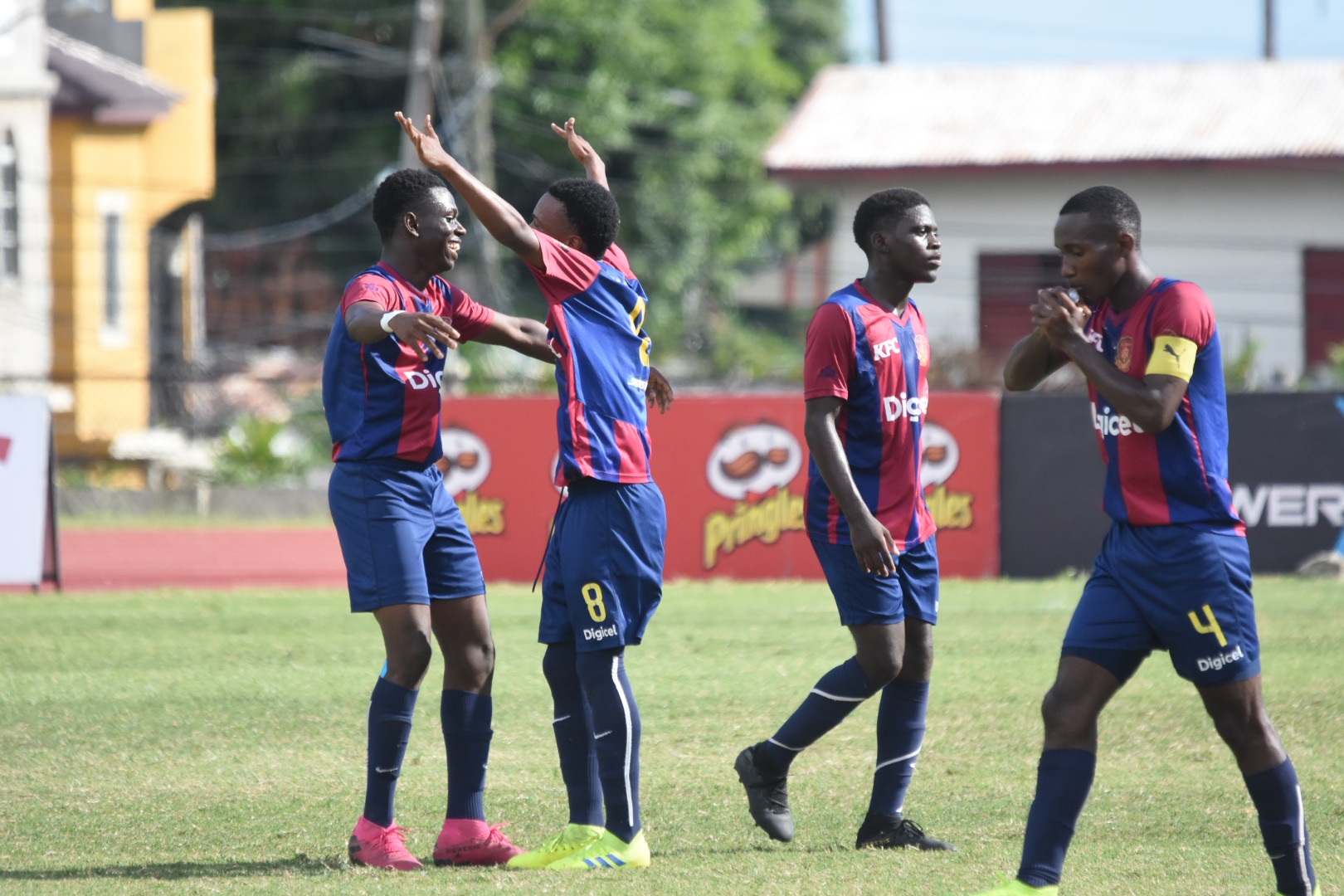 STATHS came out of the quarter-final round very easily and as a result, have emerged as title favourites, but JC, which are in their seventh-straight semi-final and have won five-straight titles from 2013 to 2017, cannot be underestimated.

The quarter-final round of the competition had two groups of four teams each and the first and second-placed teams in the groups earned places to the semi-finals.

STATHS emerged from one of the quarter-final groups with a maximum of nine points, seven clear of the other three teams – JC, last season's beaten finalists St George’s College, and Excelsior – which all finished on two points. 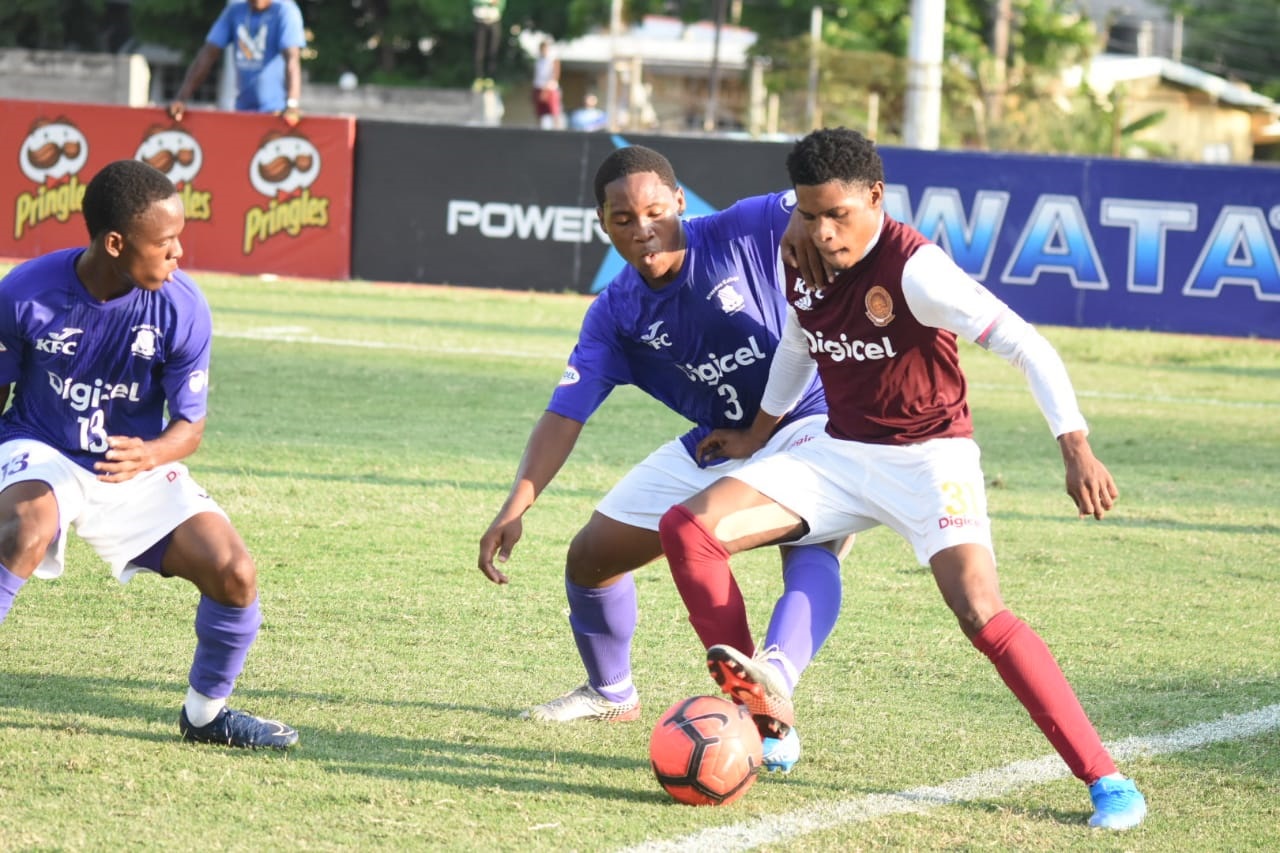 Action between Wolmer's Boys and KC during the quarter-final round of the Manning Cup. The game ended in a 1-1 draw.

KC and Wolmer’s Boys came out of the other quarter-final group locked on seven points from their three games, but the defending champions won the group courtesy of a better goal difference. The two qualifiers finished four points ahead of third-place Camperdown High, while Charlie Smith High failed to win a point.

An interesting semi-final looms between STATHS and Wolmer’s Boys, who will be facing each other for the first time this season. Both schools will be attempting to end long droughts for a Manning Cup title, a year after KC ended a 32-year wait.

Wolmer's, who make a return to the semi-finals for the first time since 2016, are searching for their first Manning Cup title in 25 years after the school last won in 1994 and lost the 2016 final to JC.  On the other hand, STATHS only achieved championship honours once in 1987, that's 32 years ago, but lost the 2017 final to JC.

Of the two teams, STATHS have a better record. The 1987 champion is undefeated in the competition, but Clarendon College handed them a 2-1 defeat in the all-island Champions Cup.  From 15 Manning Cup games, STATHS secured 13 victories and two draws and during that run, they found the back of the net 53 times and only conceded five goals.

Wolmer’s Boys, which are searching for their 11th Manning Cup title, are also undefeated in the competition but lost to Clarendon College in the Champions Cup.  They played 17  Manning Cup games, which comprised 12 victories and five draws. During that run, Wolmer’s scored 67 goals and conceded 13.

Both teams are well rested and this should make the semi-final interesting.  This will be the first game for STATHS since they completed their quarter-final round fixture eight days ago with a 2-1 victory over JC.

Wolmer’s Boys’ last game was seven days ago, but on that day they only played 45 minutes against Charlie Smith High after that fixture, their final quarter-final group game, was called off at half-time, the day before, because of rain. Wolmer’s were on course to win the quarter-final group having led Charlie Smith 3-0 when the game was called off at half-time. However, Wolmer’s completed the game the following day without adding to their tally and as a result avoided facing JC in the semi-final. A semi-final date against JC would have been the third meeting between the teams this season. JC came from behind in those two games to earn a draw.

The second semi-final is also interesting as KC and JC will be facing each other for the second time inside four days. 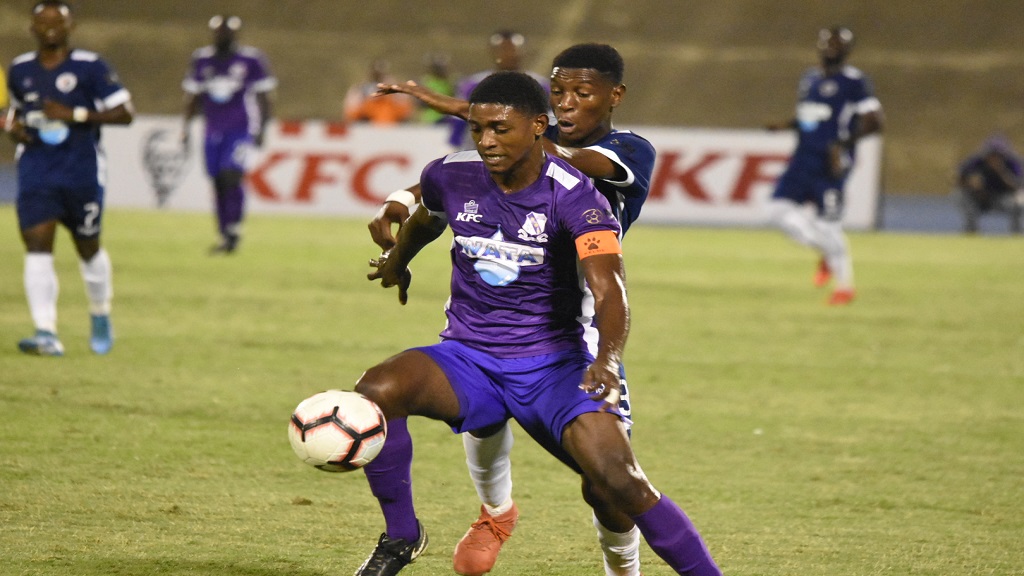 Action between Kingston College and Jamaica College in the all-island Champions Cup.

KC drew first blood by beating JC 3-2 on penalties in the semi-final of the Champion Cup Knockout competition on Saturday. The dreaded penalty kicks were used to separate the teams after they battled to a 1-1 draw at the end of regulation time in a game where the second half was played in heavy rain.

Demario McCarthy handed KC a well-deserved lead on the stroke of half time, but JC improved their play in the second half, which was marred by heavy rain, and found the equaliser from a Shadane Lopez's header, seven minutes from full time.

Although losing the battle on Saturday, JC will now fancy their chances of stopping KC from qualifying for a second final this season as the 29-time Manning Cup champion was in the driver’s seat in the Champions Cup game after the Ludlow Bernard-coached team had missed its first two penalty kicks.

Both teams got into the Manning Cup semi-finals in contrasting fashion as while KC easily qualified with seven points from their three games, JC struggled in their quarter-final group with two points and only made the semi-finals courtesy of goal difference ahead of St George’s College and Excelsior High.

KC’s form suggests they can defend their title as from 15 games heading into the semi-finals, they have won 14 and drawn once. During that period, the North Street-based school has rammed in 53 goals and only conceded four times. On the other hand, JC have played 17 games, which comprised 12 victories, one defeat, and four draws. They have scored 58 goals and conceded seven.

Based on the forms between the two, KC should win. However, last Saturday’s showdown between the teams shows that JC have a good chance of winning the battle this time around, but the form books suggest a STATHS, KC final on Friday, November 29.