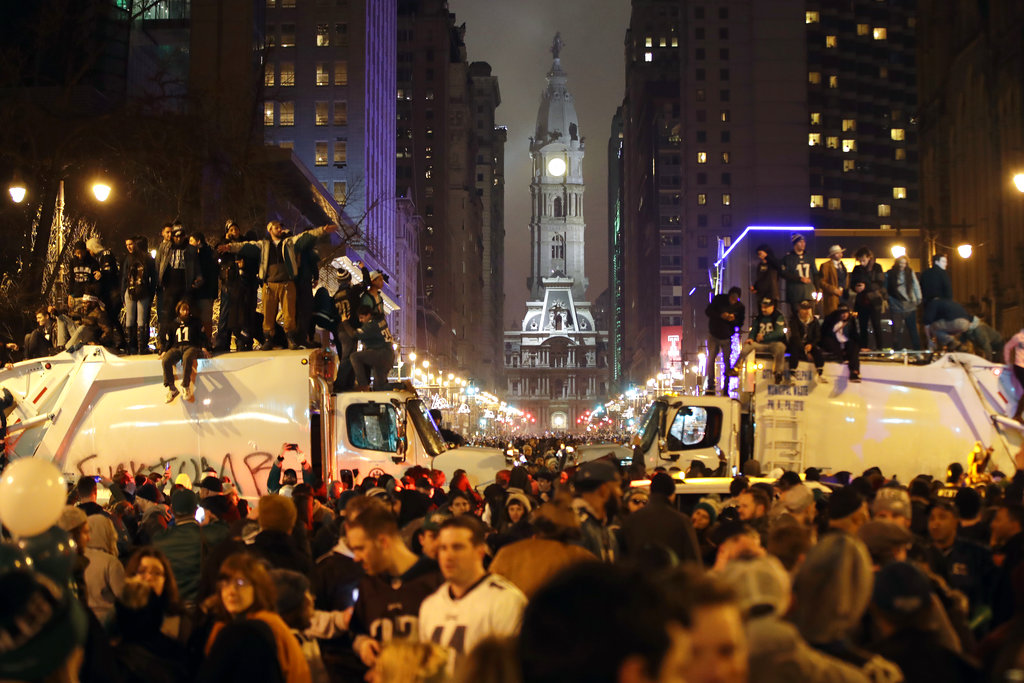 Twelve people were taken to the hospital and six people were arrested during a post-Super Bowl disturbance at the University of Massachusetts Amherst.

A university spokesman says about 2,000 people gathered outdoors at the Southwest Residential Area after the Philadelphia Eagles beat the New England Patriots 41-33 on Sunday night.

Campus police says fights broke out, the crowd threw objects and set off smoke bombs and firecrackers. Police used pepper balls to disperse the crowd and the area was cleared by 11:30 p.m.

Those transported to hospitals suffered from head injuries, lacerations and alcohol intoxication.

Police say those arrested face criminal charges, and if they are students they face punishment under the student code of conduct. No names were released.

Philadelphia is cleaning up after its late-night street celebrations, where some overzealous fans smashed windows, climbed traffic lights and trashed some convenience stores.

Rowdy fans clambered atop the awning at the swanky Ritz Carlton Hotel on Broad Street near City Hall, jumping off into the crowd in what one Twitter post calls "Ritz Carlton Skydiving." The awning could be seen collapsing later with a large group of people on top of it. It's not clear if anyone was injured. Nearby, windowswere smashed at a Macy's department store.

And apparently no amount of grease in the world can keep some Eagles fans from climbing poles in celebration. A few managed to shimmy up traffic lights and street sign poles on Broad Street. And after 1 a.m., the only people allowed inside the Wawa convenience store were police officers.

The rain and hail that pelted Philadelphia for much of the day dissipated just as people across the city spilled out of sports bars, apartments and houses.

They all had one destination: Broad Street.

It was time for a celebration 58 years in the making.

On Sunday evening, just as Nick Foles led the Philadelphia Eagles to a surprise Super Bowl victory over the New England Patriots in Minneapolis, the scene more than 1,000 miles away in Philly was jubilation and pandemonium.

Fireworks were set off. Car horns blared. And Philadelphians young and old descended on Broad Street, the iconic thoroughfare that will soon host a parade to commemorate the city's first major pro sports championship since the Phillies won the 2008 World Series.

Foles outduels Brady to give Eagles their first Super Bowl