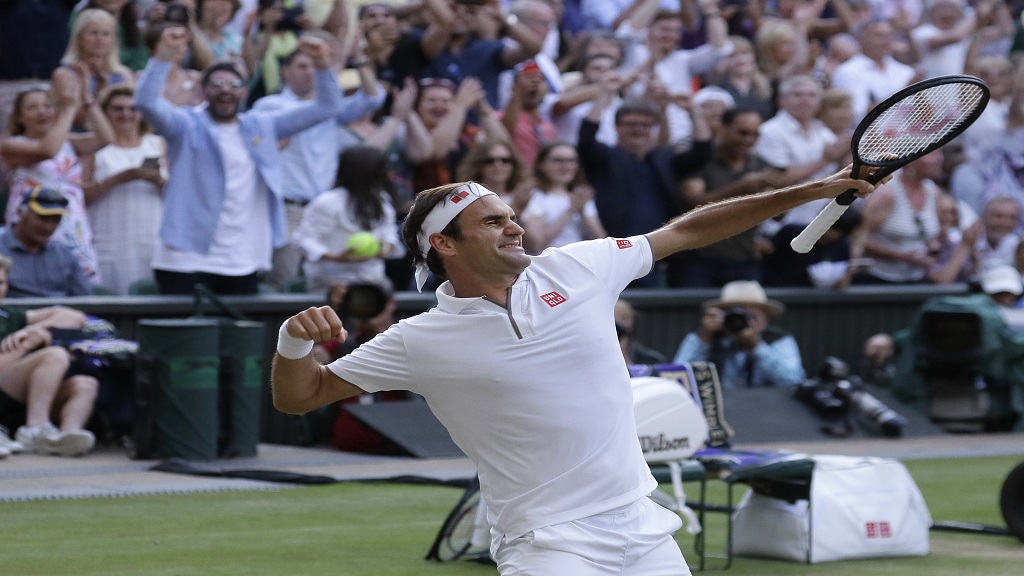 Roger Federer waited 11 years to get another shot at Rafael Nadal on Centre Court. This one was a semifinal, not a final. It was settled in four sets, not five.

Felt like just as much of a classic contest, though, one that anyone present is not likely to forget.

"I'm exhausted," Federer said. "It was tough at the end."

Federer closed in on a ninth championship at the All England Club and 21st Grand Slam trophy in all. In Sunday's final, Federer will go up against Novak Djokovic, who is the defending champion and seeded No. 1.

As entertaining as that match was — including a 45-stroke point won by Djokovic — it was merely a tasty appetizer ahead of the day's delectable main course.

Not only was this the 40th installment of Federer vs. Nadal, but it also was their first meeting at Wimbledon since the 2008 final. Nadal won that one 9-7 in the fifth set that ended after 9 p.m., as any trace of daylight disappeared, in what some consider the greatest tennis match in the sport's lengthy annals.

How excited, then, were the spectators for the rematch, more than a decade in the making? When Federer and Nadal strode out into the sunshine at 4:30 p.m., they were welcomed by a standing ovation before ever swinging a racket.

Quickly, that greeting was justified. These are, of course, two of the greats of all-time — maybe the two greatest — and they lived up to that status for stretches.

One key, for Federer, was that his rebuilt backhand, hit strong and flat more frequently than it used to be, held steady against Nadal's bullwhip of a lefty forehand. Another was that he was able to withstand Nadal's serve, which has improved a ton over the years. Federer amassed 10 break points, and though he succeeded on just two, that was enough, with the last, vital conversion making it 2-1 in the fourth set. And then there was this: Federer won 25 of the 33 points when he went to the net.

There was something of an "Anything you can do, I can do, too" vibe to the proceedings. Federer would kick up chalk with an ace to a corner, and Nadal would do the same in the next game. When Nadal jumped out to a 3-2 lead in the first-set tiebreaker, Federer used sublime returning to reel off five points in a row to claim it.

Who else but Federer could strike a serve so well that Nadal's framed response would end up caught by someone seated in the Royal Box, as happened early in the second set? Who else but Nadal could attack Federer's generally unassailable forehand in such a manner as to draw one so out of character and off the mark that it landed in the third row, as happened later in that set?

No one ever has managed to reduce Federer to mid-match mediocrity quite the way Nadal can on occasion, part of why the Spaniard entered Friday with a 24-15 overall lead head-to-head, including 10-3 at Grand Slam tournaments.

This was the second major in a row where they've faced off: Nadal won their windy French Open semifinal last month en route to his 12th championship on the red clay there. But Wimbledon is Federer's dominion. He's won 101 matches at the place — more than any other man at any other Slam, even Nadal at Roland Garros — and eight trophies.

Djokovic gets by Bautista Agut to reach 6th Wimbledon final