10 things to know about Danielle Williams 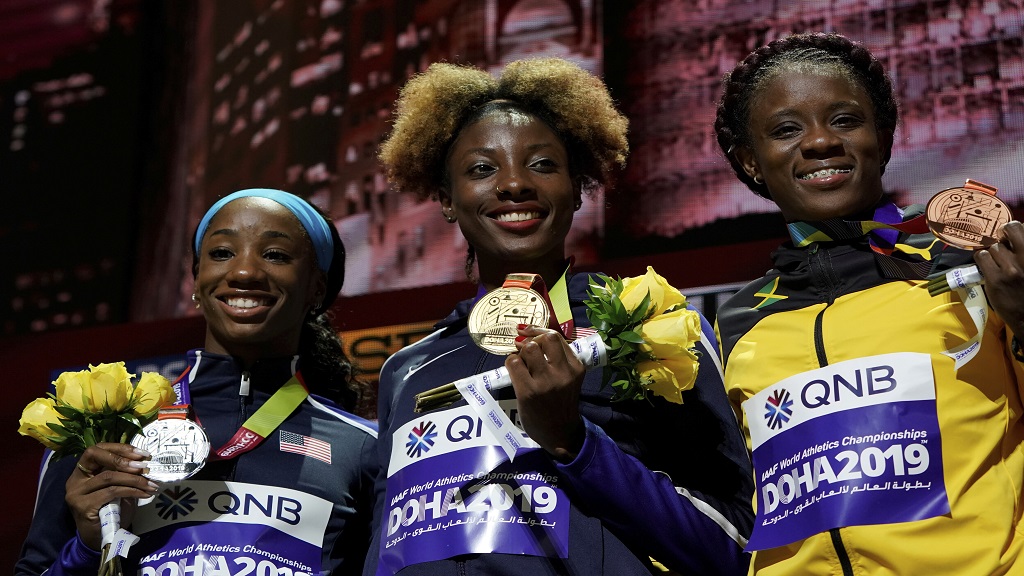 From disqualification at the Jamaican national trials in June to World Championships bronze medal inside the Khalifa International Stadium in Doha, Qatar on Sunday.

That is the story of Danielle Williams, who finished third in the 100m hurdles finals in 12.47 seconds behind the American pair of Nia Alia and Kendra Harrison.

Williams had gone into the finals as one of the favourites, and her bronze medal, which follows her shock gold medal performance at the 2015 edition of the World Championships, underlines her status as one of the best hurdlers in the world.

Below are 10 things to know about Danielle Williams:

2.  Williams attended the Queen’s School which she represented at the annual ISSA Boys’ and Girls’ Athletics Championships before moving on to Johnson C. Smith University in North Carolina.

3.  Her sister, Shermaine, has also represented Jamaica in the 100m hurdles.

4.  Williams is based in the United States where she is coached by the experienced Lennox Graham.

5.  She was in danger of not going to Doha after a false start in the event at the national trials in June. The race was later abandoned after several athletes were injured following a protracted delay as Williams refused to accept that she had false-started.

6.  After trials, Williams dominated the Diamond League circuit and, apart from winning the trophy, went to Doha with several of the fastest times in the world this year.

7. At the IAAF Diamond League meeting in London on September 6, 2019, she ran a PB of 12.41 in her heat and followed it with a national record of 12.32 to win the final, moving to seventh on the world all-time list.

8.  The 2019 Worlds bronze medallist went to Doha as the number one ranked hurdler in the world.

9.  Williams has said she came upon the discipline by chance in her first year at high school. “In my first year, the coach arranged some sticks and instructed us to jump over them and I was doing pretty well and so I continued at it. I liked the challenge because not many persons were doing the hurdles at the time and I decided to take it on and I fell in love with it,” she was quoted as saying.

10.  After surprising the world by winning gold in the World Championships in 2015, Williams would face disappointment as she fell at the national trials and did not represent Jamaica at the 2016 Rio Olympics.