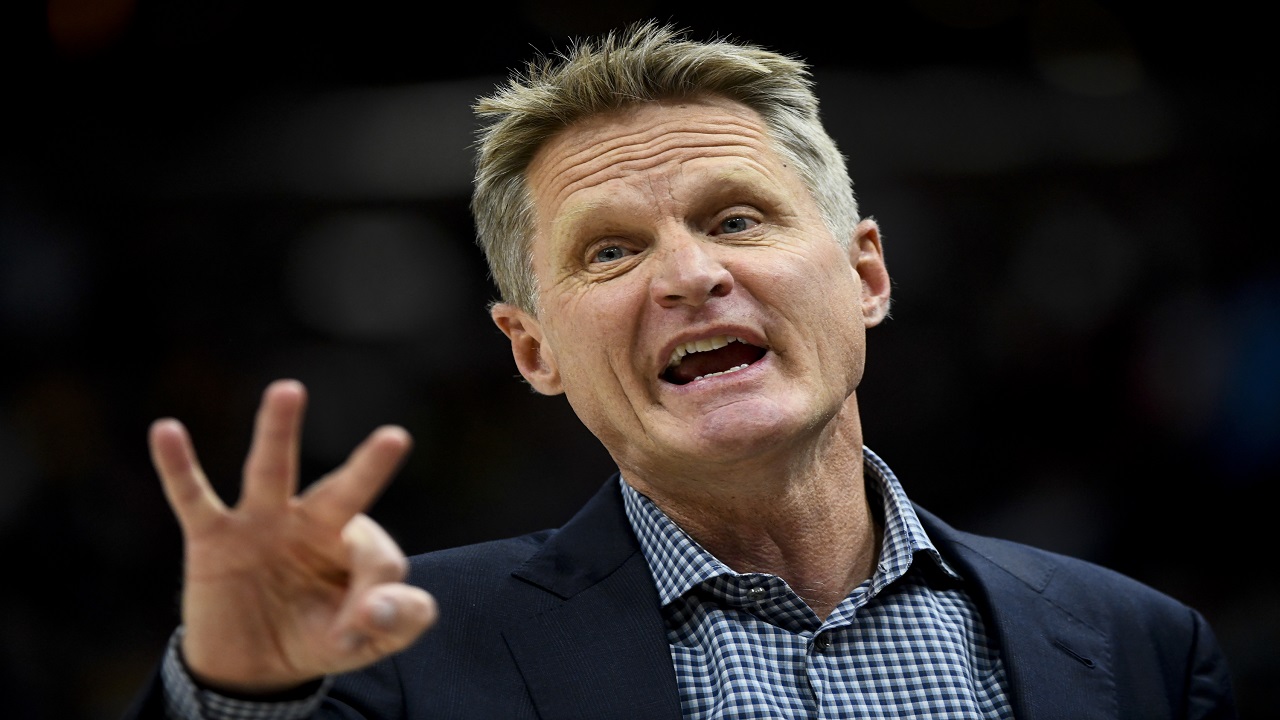 Golden State Warriors head coach Steve Kerr yells to his players in the first half of an NBA basketball game against the Utah Jazz Tuesday, April 10, 2018, in Salt Lake City.

With the NBA playoffs starting Saturday, here's 10 things to know:

James and the Cavs play Indiana in the first round this season.

James could set a slew of NBA records in these playoffs.

He's already the all-time postseason leader in points, is seven steals from passing Scottie Pippen (395) for the playoff record in that department, is four shots from passing Kobe Bryant (4,499) for another career postseason mark.

Depending on how long Cleveland's postseason lasts, James also has a shot at passing Ray Allen (385) for career postseason 3-pointers; he's 55 shy of taking over the No. 1 spot there. And if the Cavs make a deep run James could also catch Kareem Abdul-Jabbar (2,356) for most field goals.

Golden State coach Steve Kerr is estranged from his son.

Nick Kerr works for the San Antonio Spurs — the Warriors' opponent in a Western Conference first round series. This has long been a source of great amusement for Spurs coach Gregg Popovich, who coached Steve Kerr as a player and remains close with him now. Popovich has said that Nick Kerr is the subject of additional security screenings at work, just to ensure he's not a spy for the Warriors. (No, Pop wasn't serious.)

Steve Kerr says he and his son are "recusing ourselves" from family interaction during the series.

"I think they already confiscated Nick's phone," he said.

You have to feel for Omri Casspi and DeMarcus Cousins.

No active players have appeared in more regular-season games without any getting any postseason run than Casspi and Cousins. Casspi has played in 552 games, Cousins 535. And both were right on the cusp of ending their droughts this year; Casspi was waived by Golden State because it needed a roster spot once he hurt his ankle, and Cousins tore his Achilles' to end his season with New Orleans.

Tom Van Arsdale (929) is the record-holder for most regular-season games without seeing postseason play, followed by Otto Moore (682), Nate Williams (642), Sebastian Telfair (564), then Casspi and Cousins.

These NBA playoffs will be more global than ever.

A record 62 international players, from a record 33 countries, are headed to the postseason. Every playoff team has at least one international player on its roster, with Utah and Philadelphia both featuring seven and Boston, Toronto and San Antonio six each.

France and Australia lead the way in international representation in these playoffs, with seven players from each nation making it to the second season. Canada and Spain both have four.

This wasn't San Antonio's best season; the Spurs got "only" the seventh seed in the West.

But their streak lives.

This is the 21st consecutive season the Spurs have made the playoffs, one shy of matching Philadelphia for the longest NBA run.

To put their current streak in perspective, the soonest any other NBA club will be able to say that it has a 21-season postseason streak will be 2033.

Golden State and Houston have the second-longest active postseason streaks, at six. Portland and Toronto have been to five in a row, and four teams in this postseason — Miami, Minnesota, Philadelphia and New Orleans — didn't qualify for the playoffs a year ago.

Portland and Philadelphia have already won a little extra money. By winning on the season's final night to ensure each finished alone in third in their respective conferences, the Trail Blazers and 76ers picked up another $64,842 from the NBA's record $20 million playoff pool this season.

Playoff teams split payouts from the pool, often toward bonuses for players and staff.

Of the 15 series played in the 2017 postseason, Game 1 winners ultimately won the best-of-seven 12 times. That 80 percent clip is consistent with the league norm.

Since the 1983-84 season, winners of Game 1 have gone on to win the series 79 percent of the time. But that guarantees nothing — over the last seven years, four teams have lost Game 1 of the NBA Finals and gone on to win the championship anyway.

Road teams won 43 percent of the postseason games played last year, and it's reasonable to think such a success rate might be in play again this year. The 16 teams in these playoffs combined to win 351 games on the road in the regular season, or 54 percent.

The Timberwolves are in the playoffs for the first time since 2004.

Here might be the best illustration of how long the postseason wait was for Minnesota: Only 12 of the 59 players taken in the 2004 draft were still in the NBA this season. The only player the Timberwolves drafted in the year of their last playoff run was Blake Stepp, who never made the NBA but played at least three times in the World Series of Poker.